btw, the right stuff sealant will stop any leaks but getting the valve off with out destroying it is another story
M

I always use the cheap cork seals but do have a set of the reusable ones. That's the first I've heard of higher torque numbers for them.
One thing not mentioned is it used to be common for people to replace the valve cover bolts with the 80s style that have the triangle type spacers/washers under them that prevent warpage if they're over tightened and spread the pressure out a bit better. They used to recommend those with the reusable gaskets.

A block of wood (a 2x4 works great), a hammer, and some (or a lot of) patience is what it takes to get those valve covers “massaged” back into shape – and is something I have to do each and every time on these engines. Take your time and do it right the first time. You should be able to eyeball a lot of the distortions, bends or outright damage to them when in the straightening mode. Having a foot long (1/3rd meter) straight edge, helps as well.

I've seen a lot of used engines that someone used chains to pull (or to install) the engine and the chains damaged the valve covers (depending on where the chains are attached). Sometimes slightly, some times massively. I've seen a lot of valve cover leaks because of that. I don't have any reason to think your engine was removed for - but saying this for other readers of our forums.

Aftermarket aluminum valve covers are nice in the fact they can keep a constant contact the entire length of the gasket – but they don't fit FMJ bodies very well, if at all.


In the early '80's, Chrysler went from using a valve cover bolt with a round captive washer 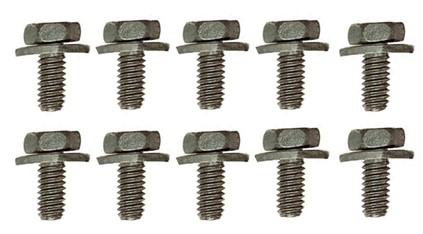 to one with a triangle shaped captive washer – which helps a lot. 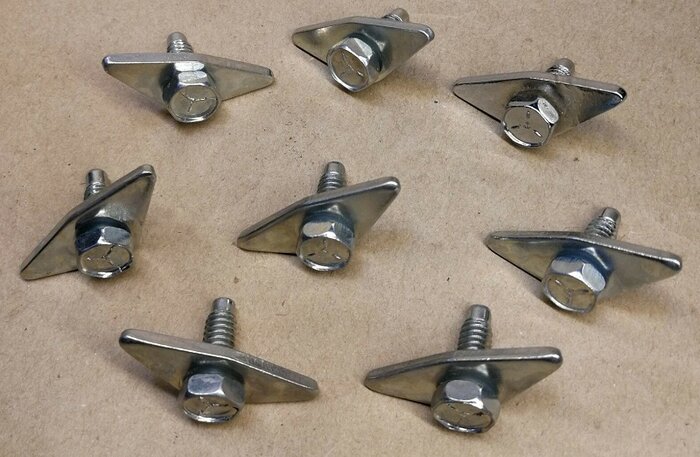 For my personal cars, I will not reuse the older valve cover bolts for they bend the cover too easily.
I have a extra set which I'm sending to JW for when she gets ready to do this . . . again (sorry JW, not trying to pick on ya).

Cork gaskets might work(somewhere) – but is a very poor gasket material by today's standards. Cork is too easily damaged when tightening the bolts down – which aggregates the leakage and further distorts the valve cover.

I recommend using a steel core (or fiber core) rubber (or silicon) valve cover gasket, which is typically more on the high end of the price range. They work better and most likely is a once and done (if working with straight valve covers), instead of doing the same job over and over.

Mopar Performance Valve Cover Gaskets this is a Mopar Performance part - which I suspect has been discontinued (but don't know for sure). There are other company's that make a similar product (and the MP part is rather pricey)

Most of the newer valve cover gaskets come with metal bushings (as mentioned above) in bolt holes to prevent one from over tightening the screws – but not all do. 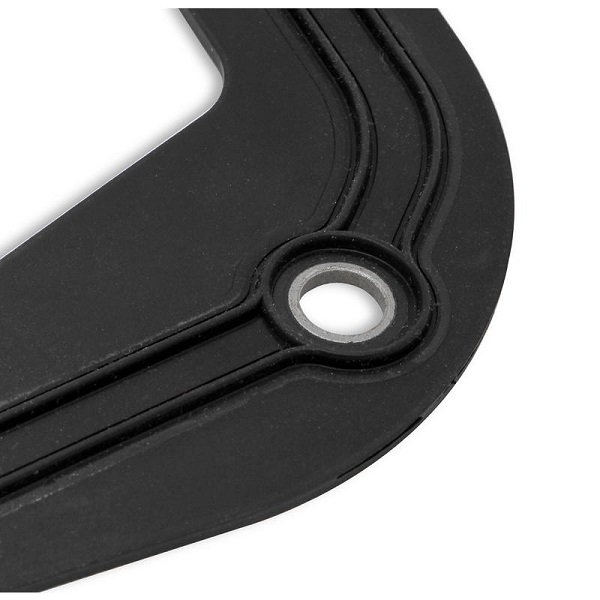 I have the fel-pro from OReilly's for gaskets.
No offense on anything. I'll be the first to admit I have no background in auto mechanics.

Although after the past few years on the forum and the help everyone provided on the 87 fifth avenue, I had no fear at least trying the valve covers.

I'm thinking I'll get my torque wrench out and make sure I have the bolts tight enough. Look forward to the triangle bolts as well.

Get them snug but not too tight then go over them again once you've driven it. If you use a torque wrench do a couple of The easy to get ones to get an idea and then do the rest normally. They're pretty forgiving tightness wise as long as you don't go too tight and warp the covers.

Leaking old cork gasket, basically all around, smell of burnt oil. And, of course, passenger side of my 79 LeBaron.

I have a pair of rubber gaskets - but those are VERY sturdy and I doubt they will seal with the un-machined cyl head and the original valve covers. SO, I'll use cork again. Unfortunately, Amazon messed it up yesterday. Got the package with a 27mm nut and Reinzosil (Hi-Temp Silicone stuff) - but the package was EMPTY??!?? WTF??
Will get the replacement delivery only tomorrow. But temperatures are declining again (yesterday it was no wind and beatiful 6°C/43°F). Today: rainy, windy, close to 32° (as will be tomorrow).
Brrr....
SO, I'll remove the cover, clean it and glue the new cork gasket to the cover (with said Reinzosil), let it cure over night, put a little bit on cork and tighten it very carefully in place. Let it cure again and hope to call it a day. While at it, I'll replace the oil pressure sender as well; read somewhere here that they are often a source of "oil outside". That's just too tight and too messed up at that area of the engine...

Aside the dirt at the cover, there seems to be a relatively fresh trail of oil on the trans cover... 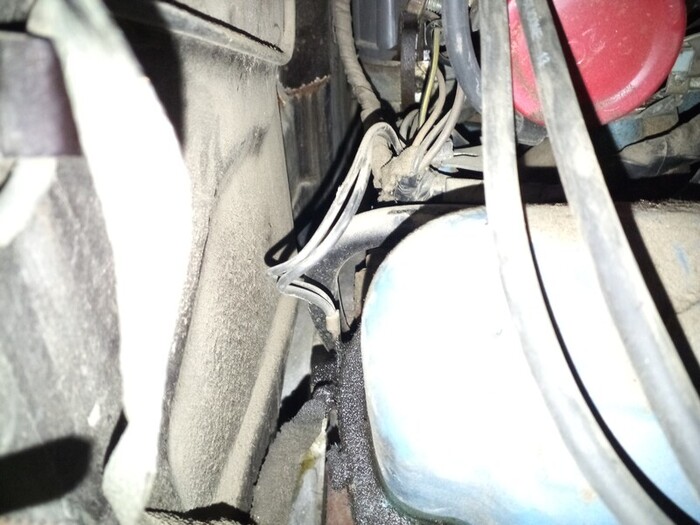 Try the follwing if you have time to wait for parts:

And you will probably want a can of spray paint and some bolts that are 3mm longer. Straighten your old rocker cover flanges out really well and you should be OK. Take the time now and you can be done with the oil seepage drama.

Probably mention before but, always use a ball peen hammer and a block of wood to "dimple" the bolt holes slightly toward the outside of the cover and, use an inch lb (preferably) torque wrench. Most cover bolts end up being way over torqued when done by feel. Just like with plumbing. Too loose and it'll leak, too tight and it'll leak. Keep going over each bolt until it holds the torque. As the gasket compresses, the 1st one torqued might be loose, and on down the line. Sometimes you have to go around the sequence 4 or 5 times. The torque should be rechecked after a few miles also, after the gasket has relaxed into the final position, just to be sure.
Last edited: Jan 16, 2022

Aspen500 said:
always use a ball peen hammer and a block of wood to "dimple" the bolt holes slightly toward the outside of the cover.
Click to expand...

It is harder to do, but if a person had a way to warp the stamped steel cover so it looks more like this, the better (but that is easier said than done):

Denting (or dimpling) upwards at red arrow and downwards with gold arrows in a very slight curve (but the later is very hard to do). In most cases just try to tap the area around the bolt holes up a bit and make sure the rest is flat.
Having a slight curvature on the flats helps, but is hard to do.

The reason for taping the bolt holes up is the metal will always bend when tightened - either slightly (if torqued right or greatly when over-tightened - which is very easy to do). The valve cover bolt torque, in my '77 manual, is only 40-inch pounds (or 3-1/3rd foot pounds) which is = to NOT MUCH!
Just enough for bolts to not squish the gasket and bolts not to self-loosen.
BudW

Guess I have to wait longer. Both items (spreader & gasket) are temporarily out of stock (at least that's what amazon.com (US) tells me here in Germany.

That is an all too common thing here lately. I won't go into the main reason for that here on this site but, it has a lot to do with a certain person who currently resides in a white house on the east coast. Just saying..................

I'm waiting until at LEAST Feb 28th for my poly shackle bushings and poly sway bar bushing kit to be back in stock, and get shipped. Ordered about a month ago already.

As I need the LeBaron (daily ride), I'll have to slightly glue it for now. And, as JW explained, it's a tetris-like job to roll/tilt the cover out of its place. And I have no AC in it...

Of course I have to put it in shape first - around all bolt holes, the cover is bend in the opposite direction than what BudW explained to have... I'll go for the ball peen hammer and some wood...

Other than that - quite clean inside, no real gunk, easily cleaned with a little brake cleaner. Even the old gasket was one piece when removing. 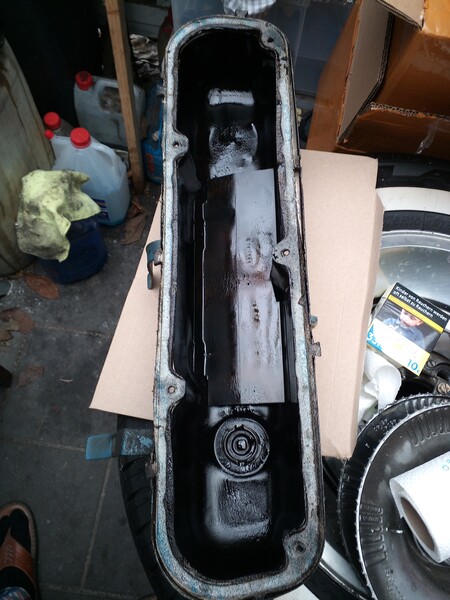 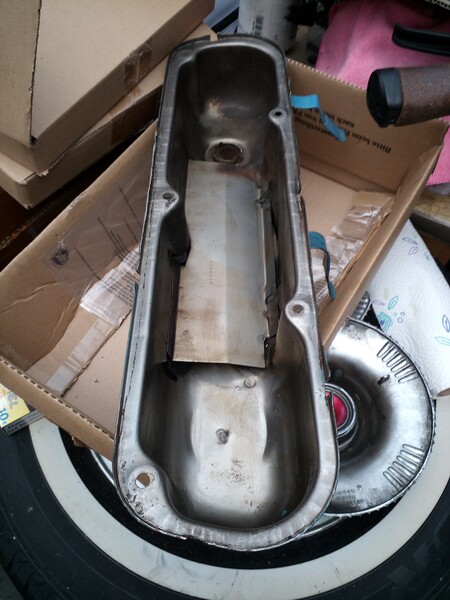 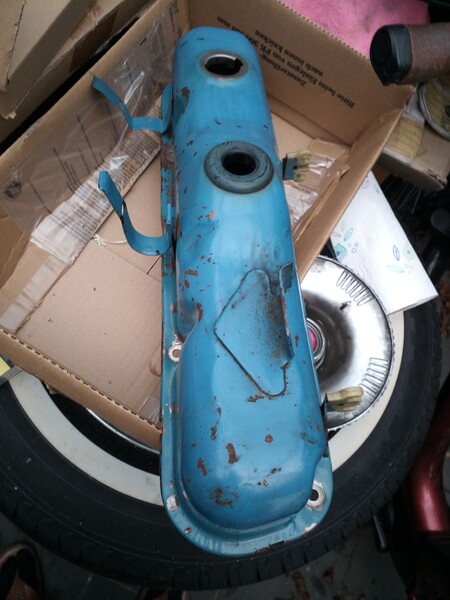 Do your aluminum rimsin that pile have the cooling slots or are they solid? It looks like the lamp shade cones are solid?
Nothing to do with valve covers but I'm curious

Cooling fins, but no slots: 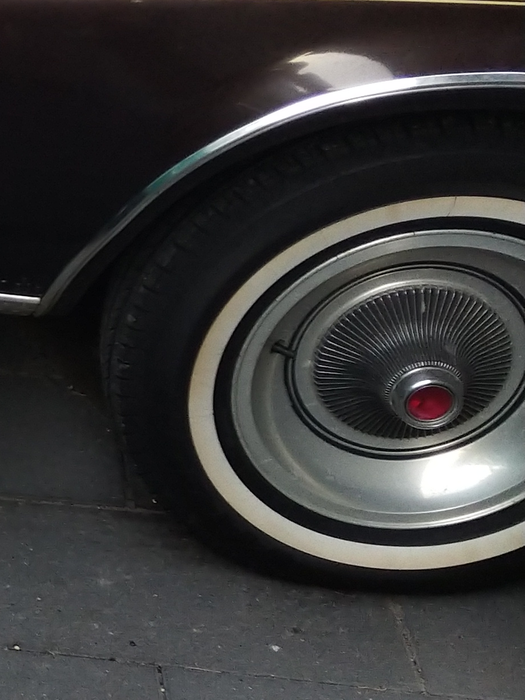 Did it. Glued a cork gasket in, straightend the cover, sealed. Done.
Hopefully I do not have to revisit this within the next couple years. 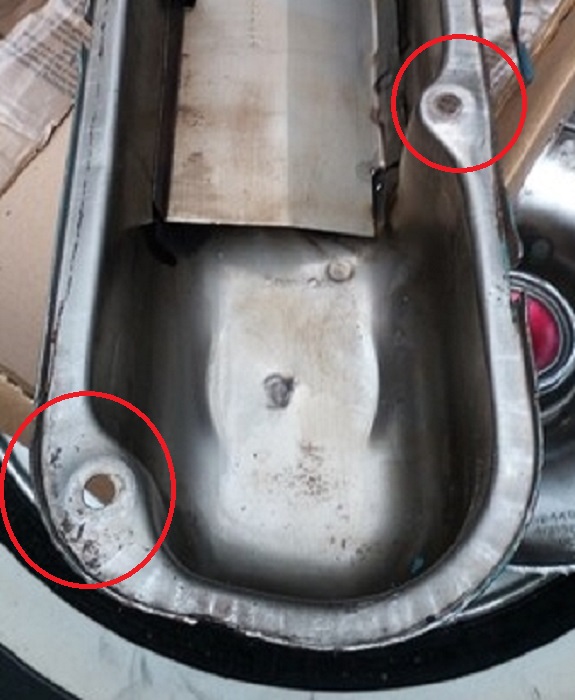 I mentioned on post # 23 (above) how the valve cover bolts (with round washer) easily bends the tin valve cover. The above picture shows the "bendage" - but doesn't show "to what extent".

There have been a few (not many), over the years, tin valve covers that I've ran across that there is a sizeable warpage between the bolt holes - which will require a new valve cover (or oil pan) replacement. I like to use a a 12 inch and 6 inch ruler as straight edges, to check for warpage. Once a person straightens the bolt hole surface out - it is a very good idea to check for warpage between bolt holes - which should be flat.
If the surface is not flat, it can be massaged into shape using a flat piece of wood (or two) and a hammer. Just take your time to lightly massage it. It doesn't take much to bend the metal into an un-useable ball of twisted metal (that some might call displayable "Art" for a museum, somewhere).
You must log in or register to reply here.
Share:
Reddit Pinterest Tumblr WhatsApp Email Share Link