Contact seller
I have a 1980 Dodge Aspen slant 6 K member and I have a 360 small block I want to put into the car.
I am searching for the F Body s6 to 340/360 mounts. Schumacher part # A73LA6
This car is a tan 4 door sedan, its in great shape, it is the same color, trim, model, year as the first car I owned when I was 15 in 1994, but this one is in better condition.
I would have kept the 225 single barrel slant six, but after a summer of hot rodding the 90 max HP engine around I blew a rod through the side of the engine block.

I have emailed Mike Schumacher @ engine swaps; I have gotten no response. I also called and emailed MoTech, they did not respond to my email. When I called MoTech I spoke to a nice and polite young lady who told me "Chris" would be calling me back, that was last week, so far; no call. I will keep working that angle...

I have been unable to find the mounts on E Bay.

Do you have these mounts? Can I buy them?

I suppose an F Body V8 K member would be the second option.

Please help me out! Lets get this bad ass sedan back on the road! 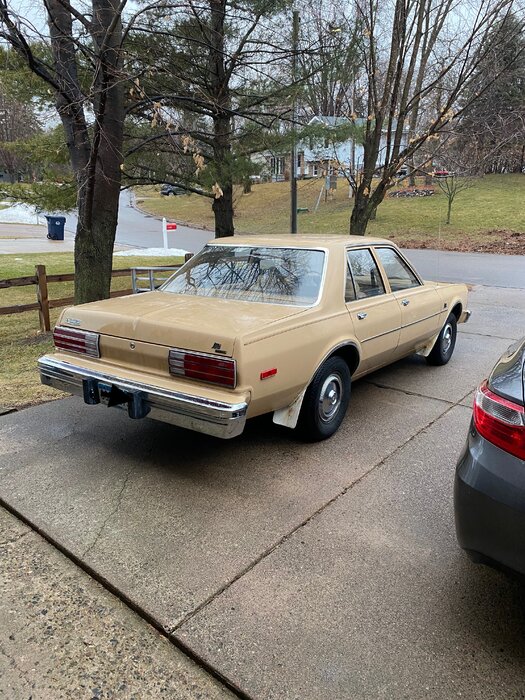 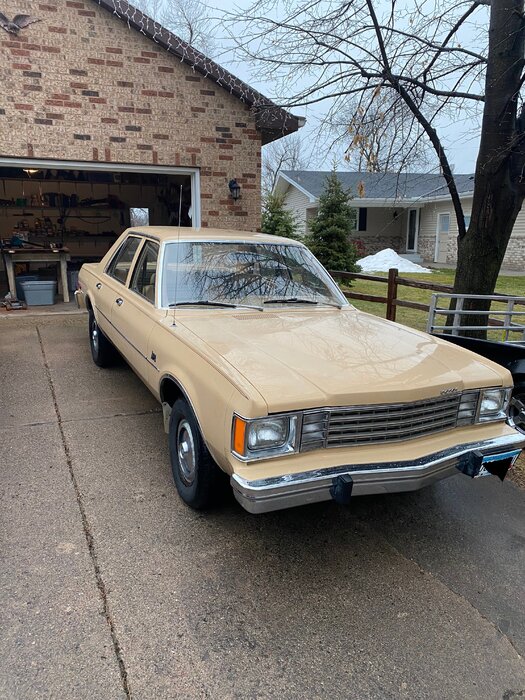 Thank you Mike. That’s good info. It’s my understanding too. Like a Fifth Avenue, for instance. Is it also true for J Body k members? I feel like I read that it is a while ago, F, J, and M body K Members should work. But I could be wrong about the Js.

The Schumacher mounts would be ideal
M

bruue1 said:
Thank you Mike. That’s good info. It’s my understanding too. Like a Fifth Avenue, for instance. Is it also true for J Body k members? I feel like I read that it is a while ago, F, J, and M body K Members should work. But I could be wrong about the Js.
Click to expand...

Yes. Plus if you can score the k frame from a yard or parts car you can get all the accessory brackets and other v8 specific parts you need at the same time. If you're really lucky the car will also have a 8 1/4 axle to save the grief of the 7 1/4 that would be in the volare now exploding but they were primarily in police cars and taxis and the days of finding those for parts are long gone.

Hey Mike,
I do have an 8.25 in the car, which I'm excited about. I also have a second 8.25 out of a 79 Volare sitting in my garage. Both are old and covered in rust right now. The one in the car is fine and the one in the garage is not locked up, both are open gears.
I'm gonna stick with the 8.25, I figure it will be plenty strong for what I am going to build.
One will be rebuilt with 3.55? sure grip from Dr Diff, the car will get new leaf springs (E Body?), and hangars (extra long to reach the shorter leaves), and some spacers or lifting brackets giving it a couple inches of height... More aggressive stance. I also have some late 90s Grand Cherokee disc brakes (junkyard condition) that bolt directly to the 8.25. All said I'll have a posi trac disc brake rear axle for about $800 total, give or take. It should handle up to 400 HP without exploding.
It'll be sweet when I'm done

Until I blew my slant six, the rear end was slotted as the first and only project I was going to do this winter. It might be the rear is pushed to the summer now, or next winter. I could spend this summer spinning one tire.

Now I need these mounts and engine.
I currently have a running when pulled, high mile, 360, rocker, LA block with a thermoquad and chrysler intake sitting on an engine stand
I did purchase some 360 spool mounts on ebay, they were inexpensive, I'm not even sure what vintage exactly, probably 74 and up.
If they bolt to my engine like I think they will, maybe I can cut the tops of these and weld them to the spool bottoms from my slant six mounts. I would probably tack them together and then pay a guy I know a $100 to professionally weld them together. It is a start anyways.

A new K member would be great but I think I'll stick with what I have for now. Once I have mounts everything will work great.

I am in the process of building out a large area on the basement of my house, its coming along good, sheet rock, floor, etc...
I'll be tearing the engine apart in my garage just as soon as I am finished with this basement.
Maybe January?
I want to get a plan for mounts figured out by then
I'll fab these if I have too, but I'll be looking for schumachers until then

They expect to have the Schumacher mounts in stock by January 2022, they put me on the list.

Cool beans, on the mounts. Please start another thread here when they are available (but after you order yours) so others can get some.

A v8 K-frame would be the next option. All '76-89 FMJ K-frames will work (are mostly the same). There are a few minor differences over the years - but nothing to keep a different year K from being used.

Once I get my mounts ordered I'll be sure to get on here and make the thread.

I actually have a used high mile slant six that I recently repainted and am planning on swapping into my car pretty soon.

My original plan was to do the V8 conversion in 3-4 years, I was only going to swap the rear axle this winter, until I blew my engine a month ago.

This used slant six gets me back on track with my original timeline, assuming it runs like I was told it does.

I'll still be buying the mounts as soon as I'm contacted by MoTech, I'm just gonna store them.

I hope tis used engine starts up.... It is a super six, which is an upgrade from my previous single barrel economy six