A500 OD spring is completely collapsed inside OD hub, is it possible it is still under tension and stuck or just completely dead and not falling out, the bottom of the spring and OD hub are even.....

Springs do break and I see broken ones all of the time, but honestly, the piston lip seals fail a lot more often - especially if transmission (or that particular clutch) has gotten too hot.
A failed lip seal will either allow fluid to bypass it or will fold over causing the piston to stick or get cocked in its bore.
Also, if the clutches in that clutch pack are wore out, it can allow the piston to overextend allowing the lip seal to bind the piston.

I have seen lip seals so hard, it is like a engine piston ring (they should be soft rubber) or turn into charcoal and shatter when touched (from excessive heat)

A transmission lip seal looks exactly like a large rubber "L", if you were to look at a cross-section of it. The inner part of "L" fits into the piston (grove) and holds it in place. The outer part of "L" uses fluid pressure to push against the bore and that allows for little pressure loss when applied and it springs back when released.

Some transmission rebuilders like to overlook replacing these lip seals during a rebuild (because there are so many of them used) - but replacing them (vs. not) makes the difference between a quality rebuild vs. a so-so job.
BudW

Never mind, OD spring had collapsed and or welded itself to the OD hub... it's not worth rebuilding.... 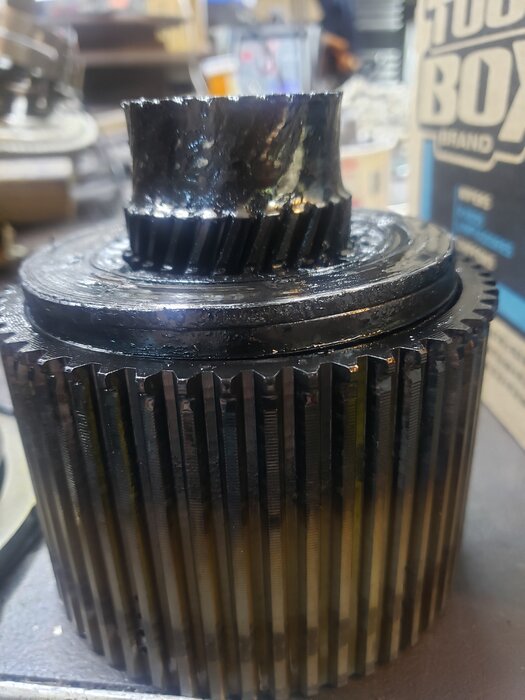 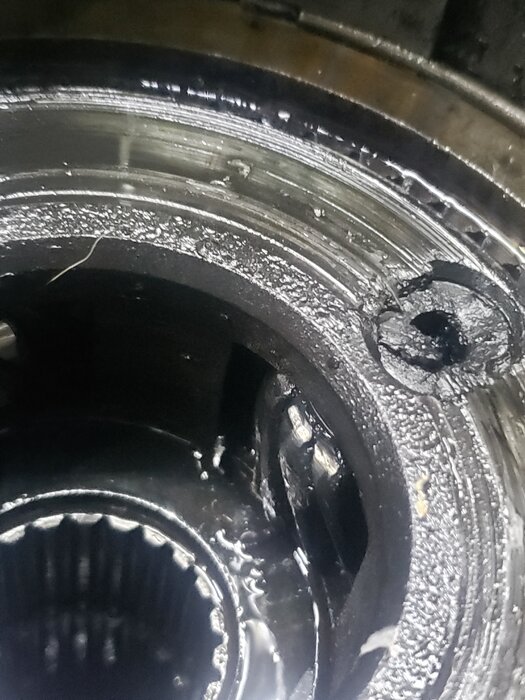 Thanks Bud for the reply, you replied as I was posting... Didn't see it until after the fact...

It has gotten incredibly hot! You can tell by the metal discoloration on the top picture.
A rhetorical question, but how hot do you need to discolor metal?

With that amount of metal (iron/steel and aluminum) floating about, it will take a lot of time to make sure all of it is all cleaned out, which is a time intensive job.
Finding a replacement, might be a better plan.

Yeah, the direct drum, low/reverse drum, clutches and most of the OD unit are cooked...
Plan B, looking for a rebuildable core or a good used one...

Depending on what year transmission you find - you might have to reuse your existing case (if good) and/or valve body.
You valve body shouldn't be damaged per-se, but it will need a thorough/in-depth cleaning.
BudW

I probably replace more than I need to when building a transmission, and ALL VB's come apart 100% for cleaning...

The main concern was with the (800 pound) Spring being stuck in the OD hub, so I just put the high tension snap ring back on it and set it aside after looking under the hub at the damage and figured I can't reuse it anyway....

Damn that sucker is torched

BudW said:
Depending on what year transmission you find - you might have to reuse your existing case (if good) and/or valve body.
You valve body shouldn't be damaged per-se, but it will need a thorough/in-depth cleaning.
BudW
Click to expand...

BudW, by any chance do you know what years/vehicles are directly interchangeable, meaning plug and play???
Its a 1988 Dakota V6 RWD A500 Main part of VIN if needed 1B7GN14X1JS****** I have the complete VIN if needed....

Unless there's something I'm not aware of, yes.

If you have a good (meaning nice people) salvage yard near you, they would be able to look up and tell you which years and models of trucks are a direct interchange. Probably online now, but they used to have those big Hollanders Interchange books behind the counter.

Aspen500 said:
If you have a good (meaning nice people) salvage yard near you, they would be able to look up and tell you which years and models of trucks are a direct interchange. Probably online now, but they used to have those big Hollanders Interchange books behind the counter.
Click to expand...

Thank you, that led me to Pullapart Interchange, mainly for newer vehicles, but you could use it to retro fit the OD's for the FMJ's out there....


Sorry, didn't mean for this to turn into a Dakota thread, but hopefully it will help someone working on an OD unit for their Hot Rods, giving a little more insight to the A500, RH/RE series Transmissions....

Looks like I was wrong on the years that are plug and play, oops.

Aspen500 said:
Looks like I was wrong on the years that are plug and play, oops.

Yes, that is what I am seeing looking at car-part.com also for transmissions...
However I am pretty sure that is with the torque converter...

I have a sneaky feeling that taken the converter out of the equation, then it will be much more interchangeable, as the flywheel and balance changed in 92 making the converter change as well.... I also think that the 5.2/5.9's would work with the correct 3.9 converter.....

I both sorta like the Chrysler new transmission numbering system on one hand and on another, it can be confusing.

The (automatic) transmissions that originally came in FMJ's are:
A727, A904, A998 and A999.
Of the last three, the A904 is light duty - and phased out/last used behind a 318 in '78. They still used it on /6 for later years - but for this post, I will not be mentioning the /6 - only small blocks.
A998 Medium duty
A999 Heavy duty
The A727 is a physically larger (and heaver) transmission than the other three are (very few interchangeable parts between A727 and the A904/A998/A999. The last three share a majority of parts with each other. For the most part, the A727 was only available on special order FMJ vehicles. 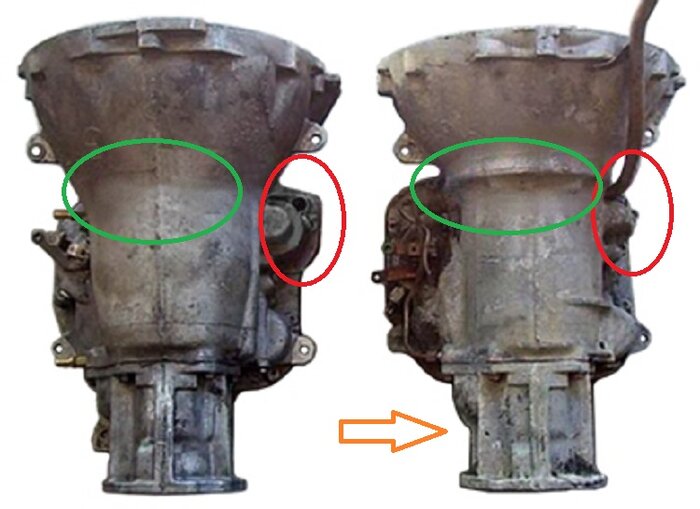 A727 to Left and A904/A998/A999 to Right. These are 4*4 transmissions and orange arrow shows the differences there.
Basically, the output shaft and extension housing is different. for the overdrives, basically the entire rear half is different.

Chrysler still used the A727 and A999 on pickups/vans/Dakotas for a long time after FMJ production stopped - and renamed the A727 to 36RH and A999 to 32RH.
The first digit is number of forward gears (3 - three speed)
Second digit is the amount of torque it can handle (0=weak to 9=very strong)
Third digit is R=rear drive and T=transverse (front wheel drive).
Last digit is H=hydraulic or E=electronic

In '88 (for pickups/vans/Dakotas) and A999/31RH was used to make the A500 4-speed overdrive transmission. For the sake of discussion, the front half of the A999 is the (mostly) the same but an overdrive was added onto the rear (or back-half of transmission).
They were renamed to 40RH, 42RH and 44RH (weak to strong), then in '93 (I think) it went electronic, or 40RE, 42RE and 44RE.
The "-RE's" need a computer to operate it - so best to find an "-RH" version.
The easy way I know to tell the difference between RH and RE is to look for the speedometer gear adapter or lack there of, for the RE's use a speed sensor (instead of speedometer gear) mounted on the rear differential. There were a few RE's that still used the speedometer gear hole, but for the most part, the speedometer gear adapter hole is the best way to tell them apart. 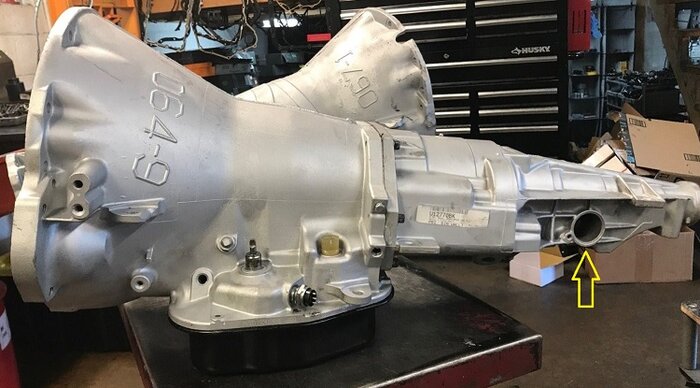 Unless you have a monster big block (or similar), there is no need to find the bigger version - so an 40RH, 42RH or 44RH is all you need. I think the 44RH is only a 4x4 transmission so makes no sense to find one (too many differences). A V-6 with 4speed will be an 40RH. It will work, but I think I would look for an 42RH if you can.
Mostly, the big differences from 40- and 42- (or 44-) is there are drums have allowances for more clutch disks. The more clutch plates, the more torque it can handle. Even with the A904, A998 and A999 - You can (typically, but not always) insert the higher capacity A999 clutch drums unto the A904 (or A998) to increase the torque capacity. 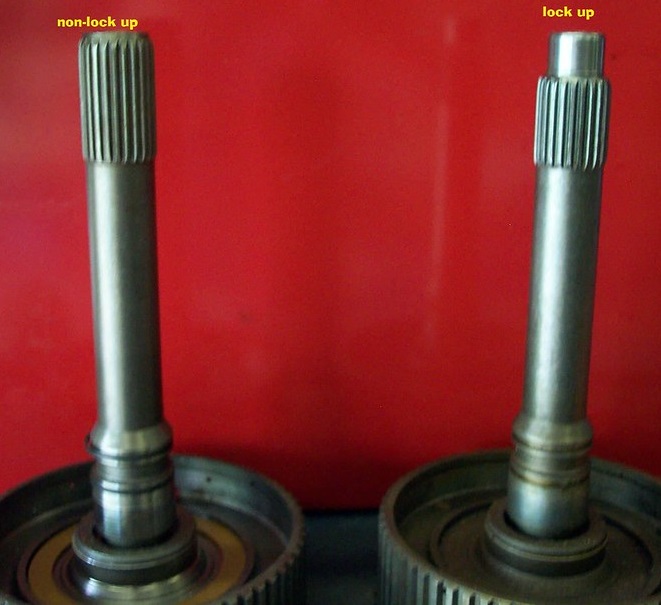 The lockup version will always have the non-splined end.

Next difference is the torque converter hub. All FMJ Chrysler automatics had slots machined into them, where they interact with the front pump gears. The slots have a tendency to crack, like this one: 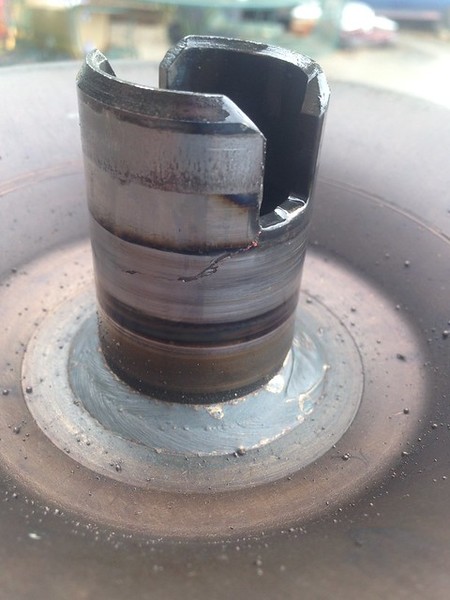 And that will wipe out the front pump bushing in no time (is not a good thing).
Sometime in the '90's Chrysler went to machined flats for the front pump and that design is far superior: 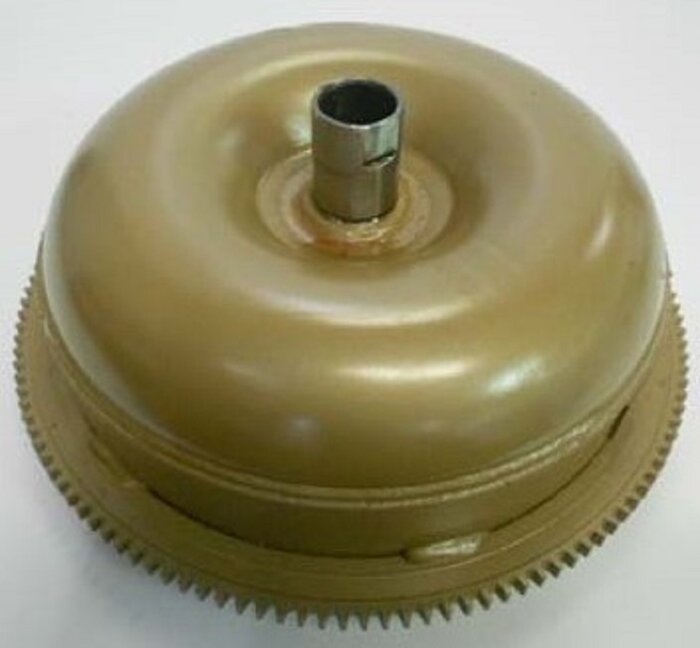 A better picture of the differences: 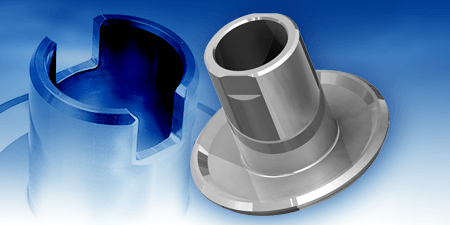 The front pump gears can be swapped out fairly easily, as a set to accommodate the torque converter hub differences (either direction):

If I was building a Chrysler automatic transmission (and I will be, a couple - soon), I will want the flats on hub as opposed to the slots.
When a torque converter company rebuilds (or makes new) a converter, they automatically cut off the converter hub and will re-weld a new hub in its place - so easy to ask for a slot vs. flat hub.

When the lockup converter first came out, some people had problems with theirs. Very little of that design has changed over the years - but, for the most part, it is a pretty good system. Racers prefer non-lockup, and those who drive all of the time, prefer lockup (which gives about ~10% better fuel mileage). I think some racers might be missing out by not racing with a lockup - but, again, this might be a better topic for another thread.
The "adapted" A518 going behind my big block will have lockup (with a flat hub converter).

If you happen to have a good torque converter (either style) but it has the wrong front pump gears in transmission - go purchase a gear set (picture above), swap 'em out, and get-er-done.
If you have to replace a converter (which in your case, I can pretty much bet big bucks that yours is full of metal) and are going through the transmission, then getting flat hub converter/gears is the only way to go.

When the Magnum engines came out, the flexplate and torque converter attachment changed vs. the style used on FMJ's and are not really interchangeable - BUT as a pair (flexplate & converter), you can can easily put a non-Magnum converter/flexplate into a newer vehicle or use Magnum Fuel Injection on an older 318/360 by installing the magnum converter/flexplate on a FMJ transmission (once you adapt the crankshaft position sensor slot onto the bell housing).