Alright guys been about a week or so now sense I installed my radio and speakers in my 78 Lebaron. Gauges worked like the should after install but all of a sudden my fuel gauge dosnt read above E and my temp gauge is all they way to the left and not moving.

Does anyone have a good wiring diagram or any clues on what happened? “Bat” gauge to the left of my temp gauge is working and my dash lights work as they should. So I’m kinda confused I reinstalled everything how I found it and now a week later nothin.. also what’s the “best or recommended” service literature on these cars?

Thanks in advance guys
M

The best service literature is the factory service manuals. You can get them on ebay for decent price. That year has 2 manuals so make sure you get both of them. If they're just selling one it's not a complete set.

For the guages did you have them out or run anything behind that part of the dash? If something was unplugged or a wire pinched or broken that would cause problems. The gauges plug into boards behind them instead of having wires running all over the place but temp and gas are two separate units. There is a little voltage regulator in there that is pretty rare to go bad but can cause problems if it stops working.
T

Gotcha only thing I ran behind the cluster was 2 speaker wires. But I made sure they were out of the way of any of the original wiring unless something has come loose? I’ll be pulling the dash back off tonight hopefully and will be able to double/triple check wire routing and such. And thanks I’ll be sure to order them!

On mine the temp and alternator gauges weren't working very well, sometimes they'd work other times they wouldn't, I took them out and put them back in and they worked for a little while, then stopped again, after a few times of that I finally notice they seemed loose, turned out the metal plugs (I'm not sure what they're called) the gauges plug into on the circuit board were the problem, I carefully took them off, bent them with pliers, put them back in, then put the gauges back in, and they've worked great ever since. I'm not sure but I believe the gas gauge plugs in the same way as the temp gauge (its been awhile since I had them apart)
Last edited: May 28, 2020

I found this picture online, the metal "plugs" I'm talking about are the 4 matching things in a row 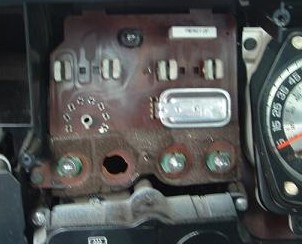 That sardine can looking thing is the voltage regulator.
D

Actually it's called a "voltage limiter", it limits the voltage running through the printed circuit panel on the instrument cluster.

Thanks for pointing that out. I'm getting sloppy in my old age.

The voltage limiter allows 5-volts to your gauges. If you are having problems with both temp and fuel (or oil pressure, if equipped) then the voltage limiter is the most likely suspect. If intermittent gauge operation and/or with the alternator (or amp) gauge, then cleaning the copper contacts make a world of difference.

Getting off subject a bit, but this link talks about the voltage limiter some RTE limiter - rte . I have two new RTE limiters (one for each car) for whenever I get into the dashes apart on either car. Their limiters are a bit pricey ($50 US) – but are cheaper than getting new gauges if one goes out. Been my experience that factory limiters do go out after ~100k miles or after 20 years – so many of us might be on borrowed time. I had to replace tons of them back when I was working at a dealership (thirty years ago).
BudW

I'm lucky, my car still has the limiter it was built with 41 years ago. There, now I've done it. Next time I drive the car the gauges won't work

For those who do not want spend the$50 for the regulator from the mentioned company MoparAction Aug 2000 has an article on how to build a voltage regulator from solid state electronics. I did this on my B body and it has been working for 15 years.
You must log in or register to reply here.
Share:
Reddit Pinterest Tumblr WhatsApp Email Share Link