Can anyone give me some input on what oil pressure sending unit the Fmj-s used that had the dash mounted oil pressure gauge? Thank You, I thought it was the canister type sending unit vs the idiot light type like on the older swept gauges.
X

Move on, nothing to see here, unless your the one person I posted these pics for. 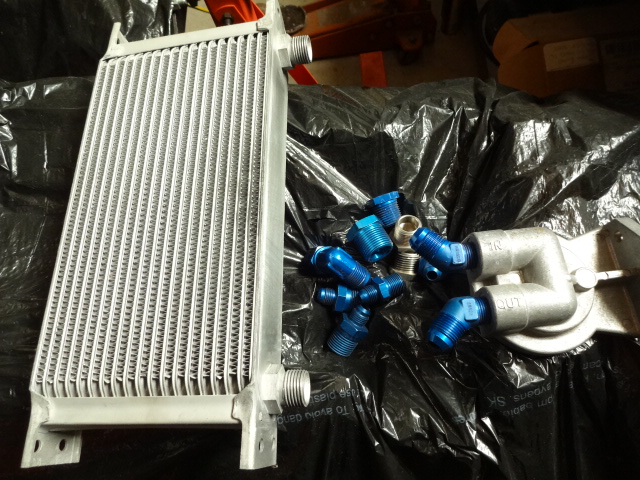 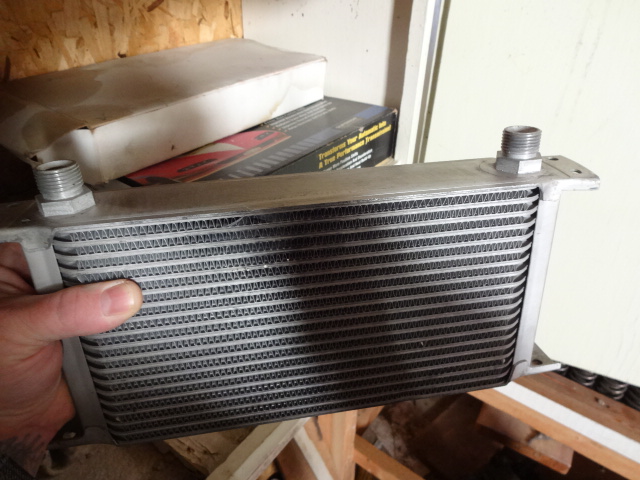 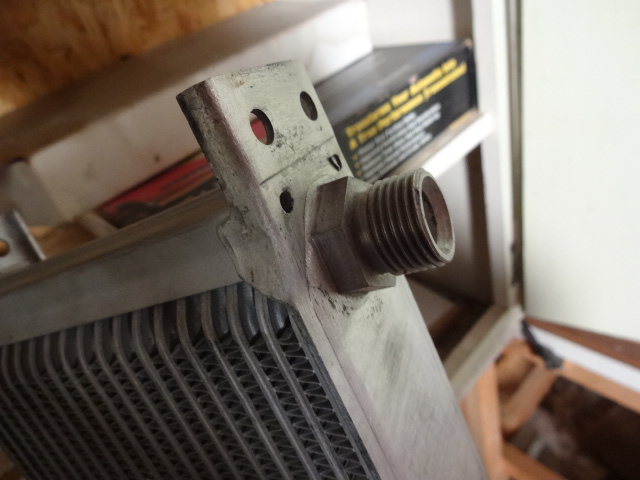 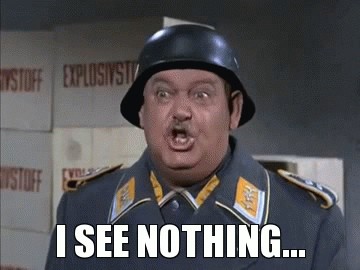 Mine is back by the distributor. It's a big one like in the photo. They aren't expensive but if they spring a leak they make a mess of your wires
X

Thats funny I just bought the sending unit today off ebay, they were as high as $32 shipped but I waited and found the same PN for $13 shipped.

I can probably look in the cop car section maybe? To see how its wired. Im just wondering what voltage its based on abd if the whole circuit is as easy as it appears to be. The last car I had one in long long ago I really didnt care if it worked or not but it stayed pegged all the time and im not sure if it was from high op or if I had it connected to the idiot light type sending unit vs this type.

I studied the wiring diagram and they show a grey wire going into the 6 pin connector near the rear of the engine. It's dashed "With gauges only" BUT, they don't show the continuation. It goes into the same connector cavity as the wire from a low pressure switch (for idiot light). I couldn't find an oil pressure gauge anywhere in the diagrams. All it shows is the grey wire going to the right circuit board connector cavity "J", but that's for the light obviously.
It's like they forgot to put the rest of the gauge circuit into the diagrams. I swear I've seen the wiring schematic for the oil pressure somewhere..................

I would ASSUME (assumption, the mother of all f*** ups) the gauge runs off the voltage pulse from the limiter, same as the other gauges. All it needs is the correct voltage on one terminal of the gauge and the other wire runs to the sender, which ground through the case to the block, plus power and ground for the gauge lighting.
Last edited: Apr 26, 2019

I couldn’t find anything with the ’86 FSM I have at work. The ‘70’s vehicles (not F’s) use a 5-volt source attached to one side of the oil pressure gauge (the same method used (same 5v power source) for engine temp gauge and fuel gauge). The other side of gauge attaches to the oil pressure sender – which grounds via the engine block. As engine oil pressure increases (fuel level rises or engine temp rises) the internal resistance drops which makes the gauge needle move more.

I would think the ‘80’s M-body and F’s (police) oil pressure gauge would tap off the same 5v voltage limiter because the sending unit is the same part used in the ‘60’s to ‘90’s.

Normally, the oil pressure sensor (police) and switch are both located at rear of engine, not far from distributer base using an odd shaped “T”. The cars with the engine oil cooler, both parts have been relocated to the passenger side fender brace. 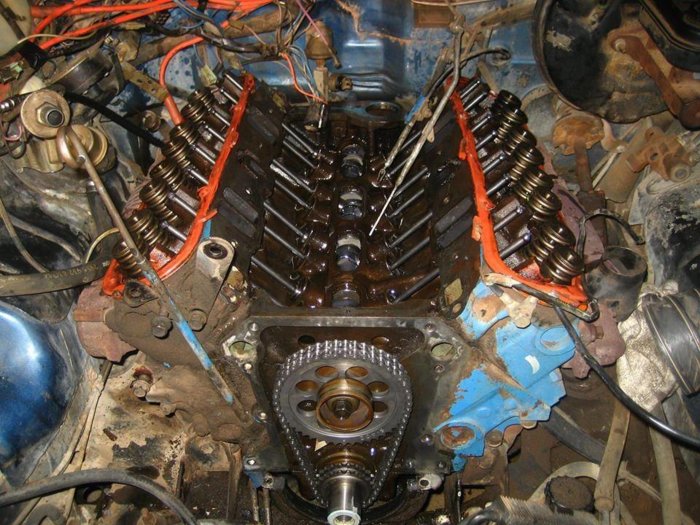 The switch and sender can be seen in rear. 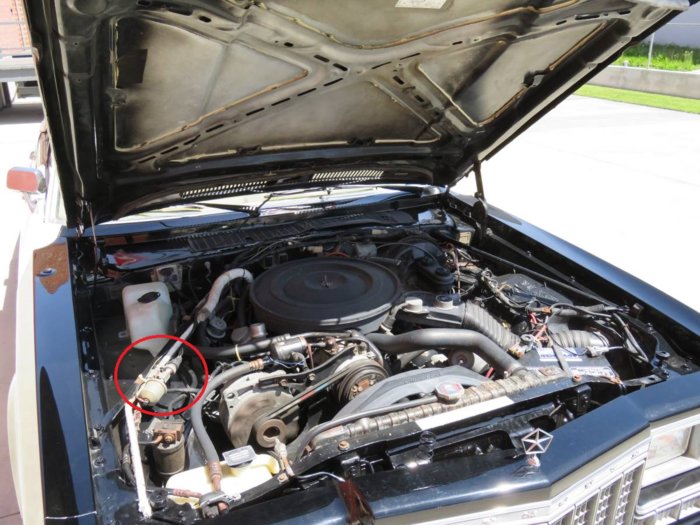 I have a couple normal "T"s in my garage - but have a feeling it will take me a long time to find one.
BudW

Aspen500 said:
I would ASSUME (assumption, the mother of all f*** ups) the gauge runs off the voltage pulse from the limiter, same as the other gauges. All it needs is the correct voltage on one terminal of the gauge and the other wire runs to the sender, which ground through the case to the block, plus power and ground for the gauge lighting.
Click to expand...

Correct except I can't find anything to say if 5 or 12-volts.

You can take an old fuel sender (with jumper wires) to test the oil pressure gauge or temp gauge (dash) for operation. I guess the gauge might be 12-volts, maybe. The sender would work either way, but what matters is the gauge calibration itself. I would try using a temp sender or fuel sender at a lower voltage, first. The last thing you want to do is burn out your new oil gauge before knowing what voltage it uses.
BudW 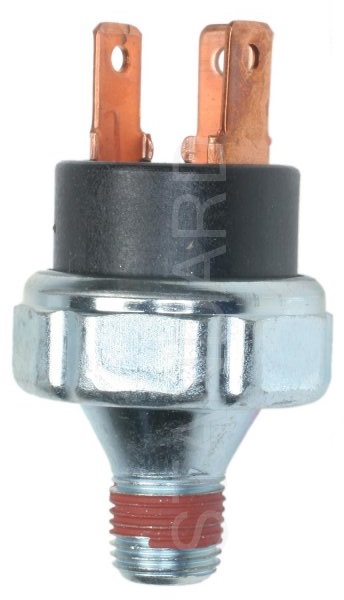 It also sends voltage to choke thermostat coil, via the 3rd connector.

This is for the oil pressure gauge sender 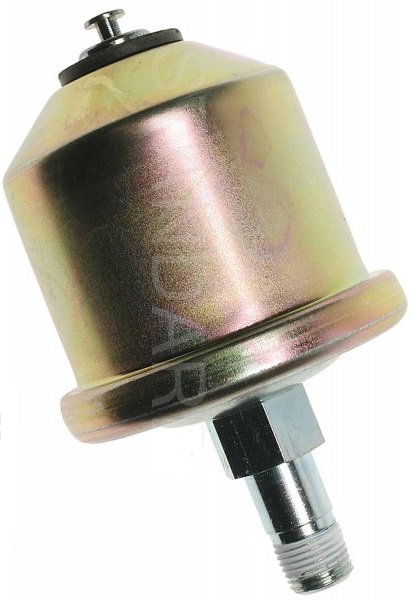 I found where it tells the limited voltage. It's on the page with the printed circuit. Shows "voltage limiter" and calls out the 3 terminals as 12V (input), 5V (output) and ground.

I was trying to figure out what the manual was talking about when it showed with oil cooler, saying the sender and/or switch was located on the right strut (or something like that). Couldn't figure out what they meant by "strut". Now it makes sense, the diagonal strut must be what it means.

Having some minor (OK, could be major, lol) brain fade. Where does the oil pressure gauge go? Is it in the spot where the "OIL" and "BRAKE" warning lights are in the cluster or off to the left where the clock (or block off) would go?

Where the clock goes.

DCAspen said:
Where the clock goes.
Click to expand...

GREAT INFO! Thanks everyone!

I was out putzin around last night looking for my best under dash harness (wish I had a nos one) as was thinking screw it if need be ive still a couple new clocks and could use one of them.

Before I even seen the block I was planning on using the idiot light sender and the pressure sender if its not too cluttered. Something tells me the new idiot sending unit I have is two prong, I need to look. I was also wondering if the unit was pegged most the time with a hv pump with the pressure up a bit if I could add another resistor to drop the voltage more to get some sweep out of the gauge.

I was a bit bumbed as well as the good circuit board I thought I had isnt as good as I thought, the second one I dug out was a no go but I found two nice ones im sure one will work good. Another part id like to get NOS but the only one that jumps out is $149 from old frank mitchells joint. But ive seen them pop up for $60 now and then so I will look for one of them in that price range.

I was trippin a bit over how old our junk seems, well is. Ive seen better quality wire harnesses in old washing machines. I cant f up with my nos underhood harness but have vivid thoughts of my sisters new 77 F and it was a hot mess burning the fuse able links like it was the 4th of July.

I did find the circuit board from my old 12 valve cummins and go figure the same exact design in the early 90-s that was used for the past 30 years. Must not be too bad.
V

I have a nos 76 PC board. I got $120 in it. I bought it after I was told they were the same and superseded but they are not the same as 77. I ended up getting a used one from JIM AZ. Those pins are bad/fragile part of those boards. And yes, those fuse links seem to melt quite often.
Last edited: Apr 27, 2019
X

Ive a couple with the pins in bad shape or broke off (although I think MAYBE some pins could be swapped from another board) and one bad board was from the dash lights being used alot and the holes where the light plugs go in a couple showed signs of alot of heat and so the board crumbled.
V

I repaired my old one and it seemed to hold well but when I had it apart I changed it out. The 76 board pins are located differently and the circuit pattern( for lack of the correct word) is different. If I dig it out I can take some pics. IIRC I bought it from the guy in Florida. Even if you don`t want it I may post it for sale here as I doubt I will be getting any other 76 f bodies
Last edited: Apr 27, 2019
V