Out with the Ford, in with the Dodge

Earlier this year, I replaced my 2000 F150 with a 2002 Ram 1500. Although my F150 still ran fine, it was rusting away and I did not want to put more $$ into it. I found the Ram for sale on the front lawn of a house near me and found that it was just what I was looking for. A standard cab, 8 foot bed, with NO rust! It is almost the same color as the Ford, but is more plain Jane. Less things to go wrong. The Ford had power everything, half of which didn't work anymore. The Ram has icy cold A/C, automatic, and AM/FM/CD. Just the basics. It even has crank windows! I love the 4.7 Magnum V8 as it has great power, runs really well, can tow my trailer with no problem, and just sounds great - a nice low stock exhaust rumble. I'm really happy with it. 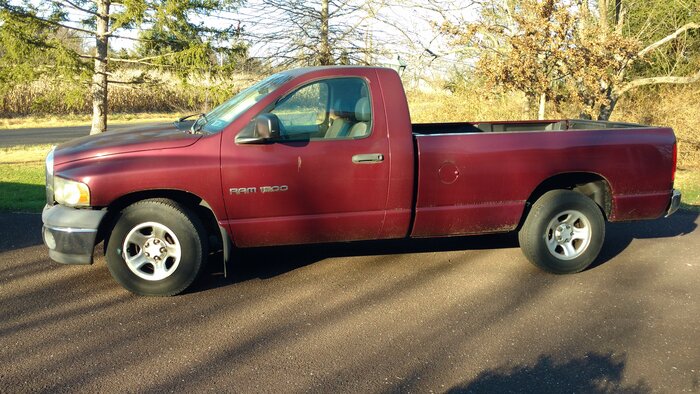 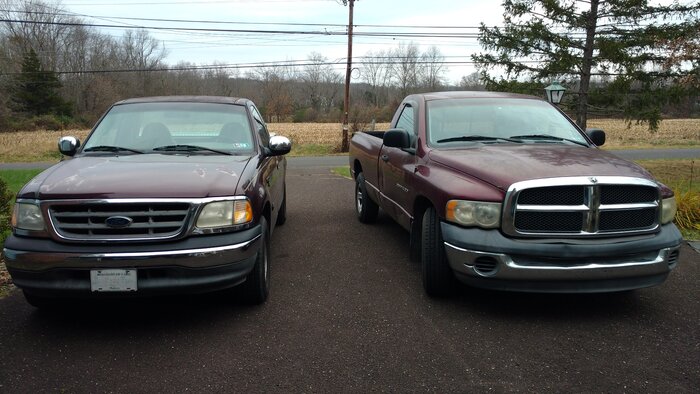 Good for you. Glad you gave it many more years of a good home. I don't like Chrysler's modern cars, but I would drive one of their trucks. I don't think I would drive a Ferd or General Malfunction made since 2004

I have not had good luck with any of the Fords that I have owned: An '82 Escort wagon 5 speed that was fun to drive but a POS mechanically; a '93 Taurus that was absolutely the worst car I have ever owned, a '99 Windstar van that was fine until 100K and then developed a dangerously rusted rear axle and front transaxle support. My F150 (the best of any Fords I have had) served me relatively well mechanically. It's main problem was rust. It rusted everywhere underneath. I even had to replace the radiator support member because it looked like swiss cheese. Electrically, it had a lot of problems too. Power locks, mirrors, dash lights, etc. Annoying stuff.

As for GM, I won't buy anything GM ever again. Those thieves stole significant stock holdings that my family had when they went bankrupt and immediately re-emerged as the "New GM!" Of course all of our old GM stock was then deemed worthless.

I have had the best luck with Chrysler and Mazda. I have owned many F bodies and always had good luck with them. I also had a '70 Challenger R/T when I was 18, and an '87 Dodge Ram 150. Both were great. Long ago, a '74 Satellite and a '70 Newport were also good cars.

I hope to get several more years out of this Ram 1500, but I'm also aware that it is getting old and has high miles. I went through it pretty good when I first got it having the rear and trans serviced, and changing the oil out several times using Sea Foam to make sure it was as clean as possible (the 4.7 sludge issue).

It has some dents in it and is far from perfect, but I didn't pay much for it. I would rather have dents than rust any day. The tailgate and rear bumper were bent up pretty good, so I put on a nice tailgate and bumper from a U-pull-it yard ($45 for the tailgate and $30 for the bumper) and it looks a lot better now. I also put on a new trailer hitch and electric hookup. The passenger door is pretty banged up, but I got another one in the same color (with manual window!! Try finding one of them!) for only $100. I haven't put that on yet. There are a few other smaller dents that I can pull out with PDR or bang them out when I have the time. The dents don't really bother me because it is a work truck for me. But, it is fun to try to make it look as nice as I can for the least amount of $$ possible. The interior is in really nice shape and just needs cleaning.

As I bought it: 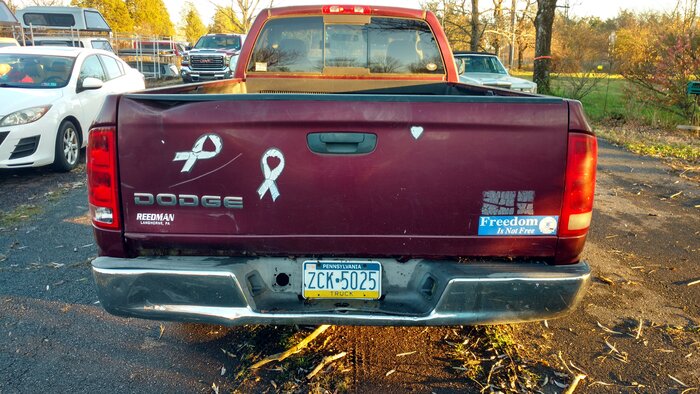 The U-pull-it truck (burned up): 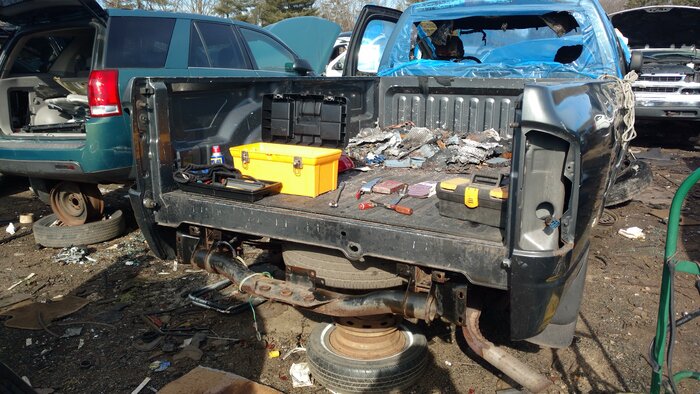 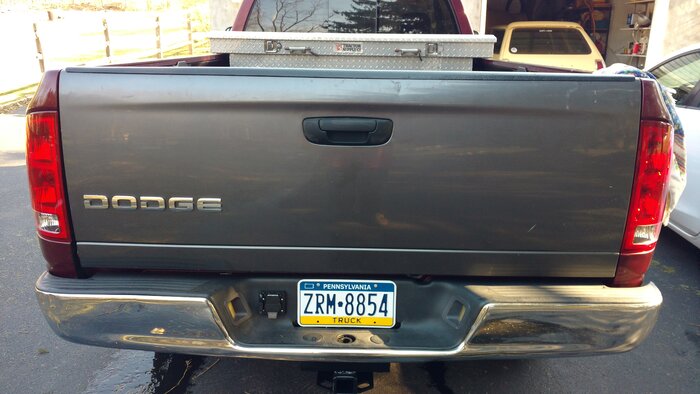 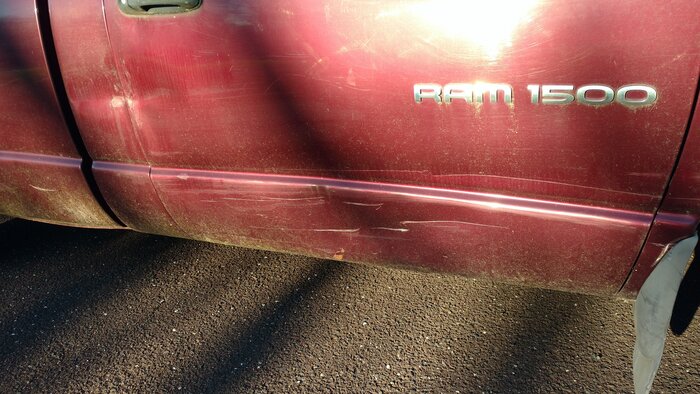 "New" door waiting to be put on: 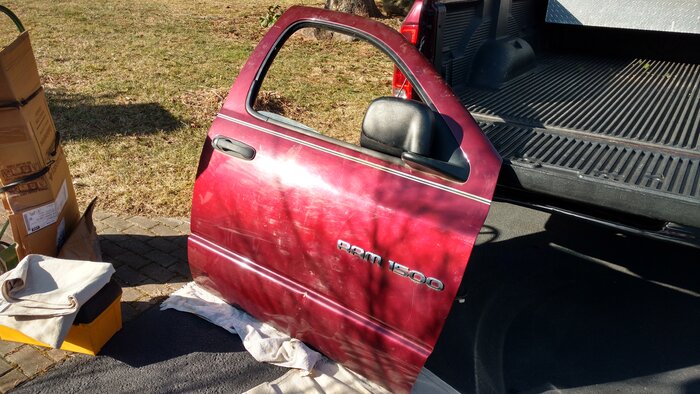 I have a 2004 Ram and never had major problems. We also have several GM's and only had problems with the fwd ones. Ford wise I've only owned Crown Vics but I'm from a Ford family and there's always been at least one around.

Too bad the Ram has that much damage but its always fun finding parts! 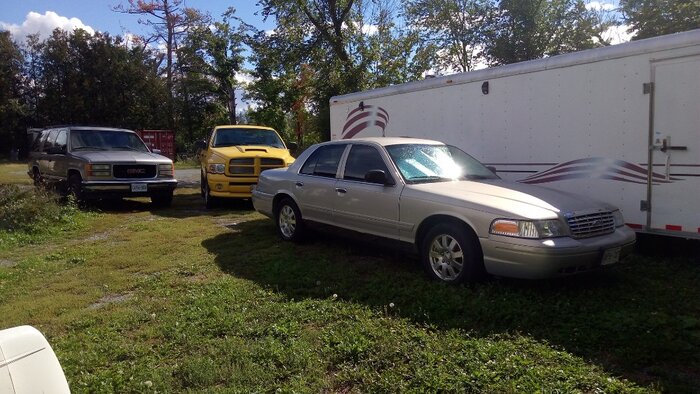 Mikes5thAve said:
Too bad the Ram has that much damage but its always fun finding parts!
Click to expand...

Yeah, but dents vs rust is a no-brainer for me. You are right, I had a good time trying to find a decent tailgate and bumper for it. This burned out '03 had the best ones I found. Nothing else much good was left on it. 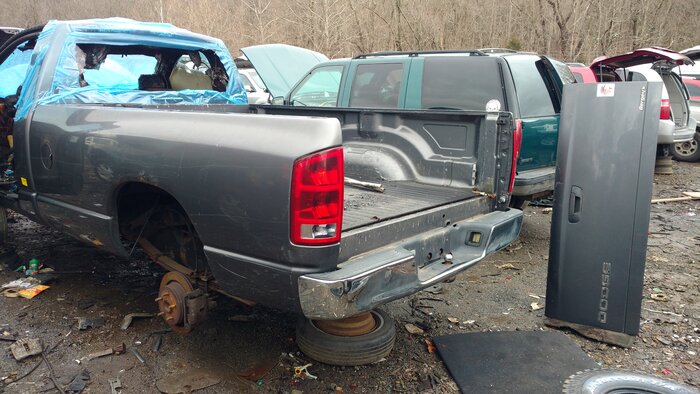 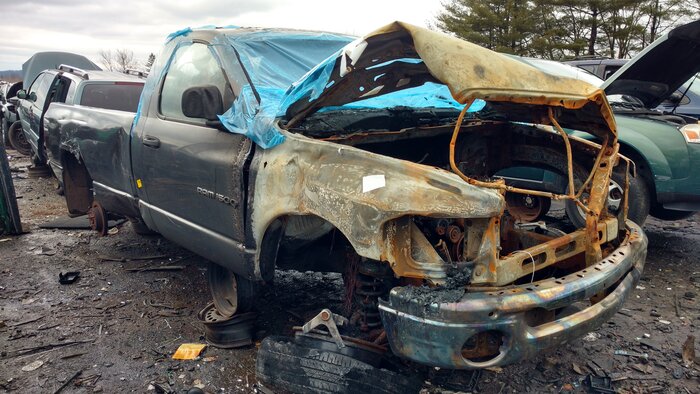 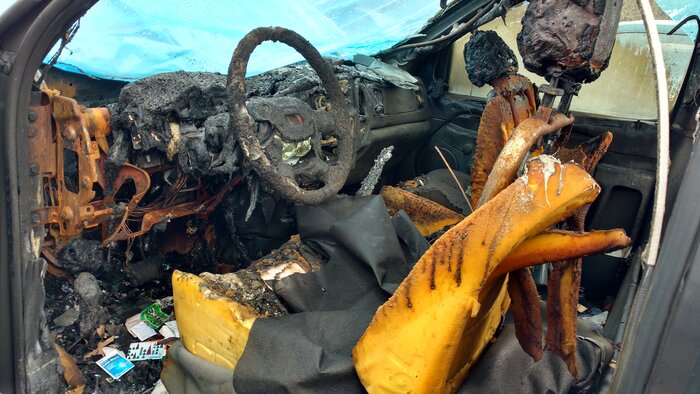 My Ford looked good, but the rust underneath was awful. I sold it for almost the same amount that I paid for the Dodge, a young guy who really wanted it bought it. He had a welder and was certain that he could repair it. I saw him with it a few months later and he was still happy with it although he hadn't done anything to it. It only had about 135,000 miles on it. I don't miss it. 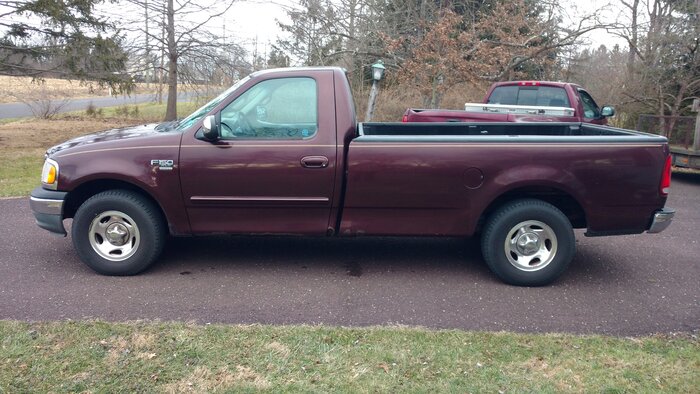 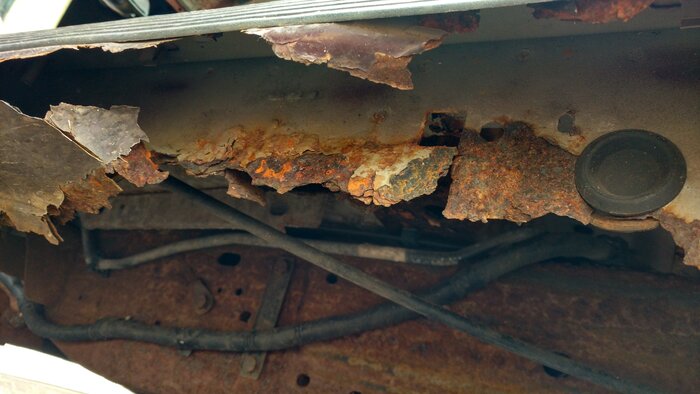 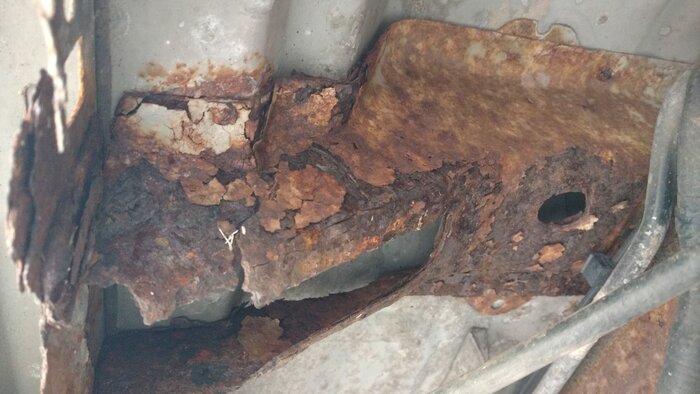 Had to be careful not to slice my leg open getting in and out. 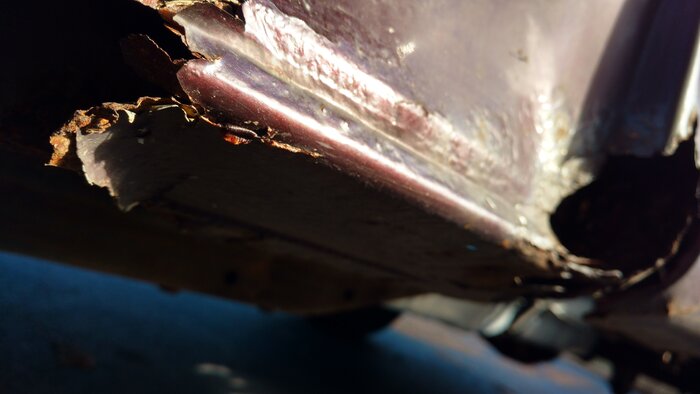 Even the doors were rusting away from the inside. I had resealed the back window once, but it still leaked like a sieve and the plastic storage bins behind the seat were always filled with water after it rained. 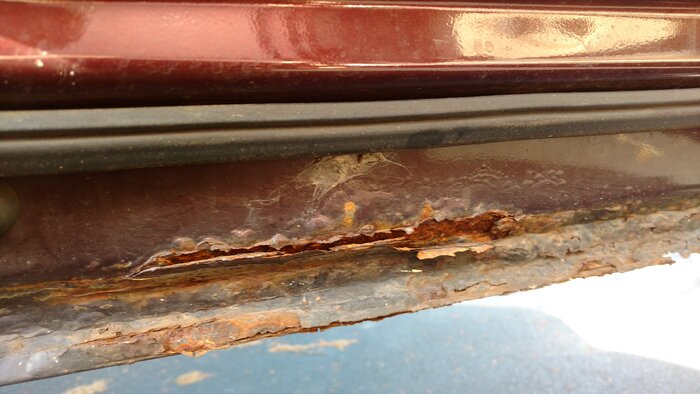 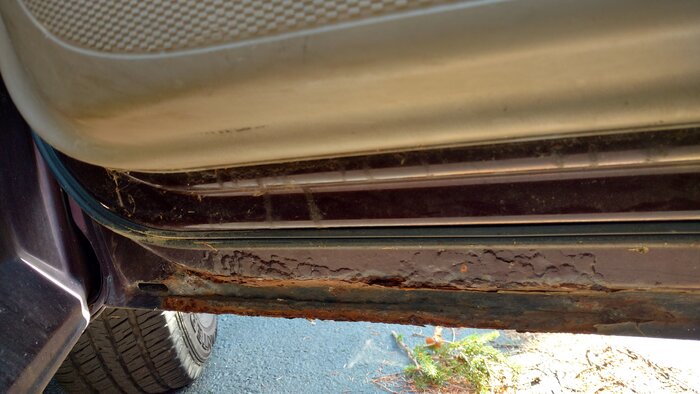 The Ford and GM trucks have frame rot problems that Dodge/RAM don't seem to have, at least nowhere as severe or as soon. I mean, it doesn't matter what make it is around here, it WILL rust away, only question is how soon? There are some that come in to the shop that we can't raise on a frame hoist anymore because the frame will collapse a the hoist pads or the front comes up, the part behind the cab,,,,,,,,,,,,,doesn't. Gotta love Wisconsin.

The 4.7L is good except they have a problem of the valve seats coming out and then,,,,,,,,,,it's not pretty. Usually ends with a valve stuffed through the top of a piston. There are 2 kinds of 4.7L, good and junk. There is no in between it seems. Timing chains can be problematic too IF it isn't maintained properly. Same result if the chain breaks or get so loose it slips. Valves and psitons become intimate with one another.

How are the all-aluminum Fords holding up in the "rust belt" areas".

Most of the people around here don't like 'em because you can drop a tool in the bed and it might go through the bed.
We get rust here, but not as bad.

So far, they are holding up well. The steel frames, we'll see! Some don't understand that the aluminum used isn't like aluminum in a soda can. It's an entirely different alloy and is a lot heavier gauge and doesn't dent as easy as you'd think. Actually steel body panels seem to dent easier than the aluminum. What some don't realize, many vehicles have had aluminum hoods, rear hatches and trunk lids for years now. F150 started aluminum hoods in 1997. Around here what happens is (if the paint gets chipped off), it corrodes and then creeps under the paint. I've never seen one corroded all the way through however. Audi A8's have been all aluminum since 1996, and not just the outer body. I mean the entire chassis, floors, body, inner structures, everything and no dent/ corrosion problems.

With the F-150's, time will tell I suppose. Plus, most that will actually use their trucks to haul things have a bed liner of some sort, either drop in or spray on and poking a hole is not a problem.

Rust here is ridiculous and affect some makes/models worse than others but it happens to them all if driven year round. May have mentioned the 2018 Silverado I worked on recently that had rust holes starting over the rear wheel openings. Not even 4 years old and rusting out already. Or the 2015 Nissan Altima that had the carpet pad showing underneath because the front floor pans had big gaping holes. Sad, very sad,,,,,,,,,,,,,,,and I've gotten myself WAY off topic,,,,,again.

On new cars no excuse for that much rust, really too bad… even the former rust prone Toyota figured it out, my winter driving and long commute, zero rust issues on my last three Toyota’s… date I say it. But the dodge gets the garage to her self…thankfully I have an understanding wife!!
You must log in or register to reply here.
Share:
Reddit Pinterest Tumblr WhatsApp Email Share Link