Was putting new carpet and headliner in the 76 Volare this last weekend and when I went to reinstall the passenger seat belt, I noticed the weighted pendulum for the locking mechanism was just lying there. What are my options? I'm assuming gluing the plastic pendulum piece that snapped is not advisable. So is that piece replaceable (doesn't look like it's meant to be opened up and worked on)? I'm assuming the best approach is either to buy a used direct replacement from a parts car or buy a new universal retro seat belt and try to force it (but it will be new).

Might be worth a shot to get a hold of this place and see if they can repair it. One problem with used belts is, the webbing is 40+ years old and may not do the job if the unthinkable happens. Of course, rewebbing is possible though. Not sure about universal replacements. It'd be better than nothing but it'd be my last choice.
Ssnake Oyl Products

For a used one, check with Deconstructor Jim out in Arizona. Great guy to work with, seriously!
Jim's Az Parts

Good info, thank you! I'll teach out to both. Still a little scared about the pendulum being plastic... now I'm half worried about the driver side. 40yr old plastic piece kicking off the locking mechanism. Scary stuff. 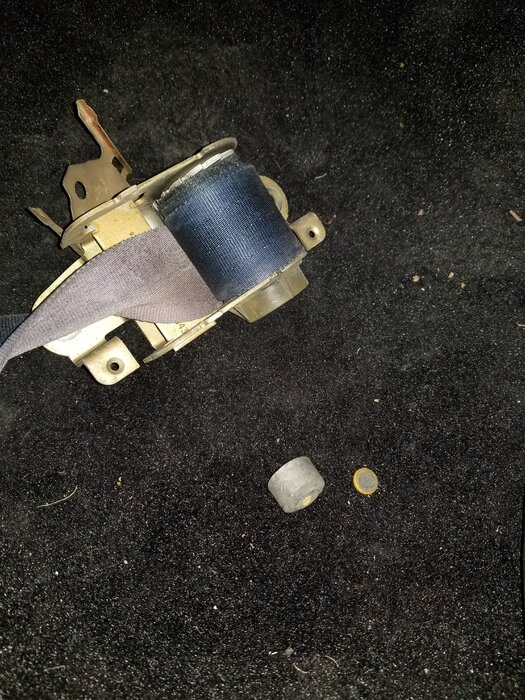 You'd think something as important as a seat belt, they'd be made of metal and not plastic. Without the pendulum the seat belt is useless, it'll never lock.

I don't remember for sure right now but I'd swear the ones in my car are metal but a '79 has different belts than a '76 does.
M

If it's easy to jbweld it or glue it in a way that it'll hold I'd rather go that route then getting a used one that might have been in a wreck or be more weathered or trying to jerry rig some aftermarket one to work.
X

If it were me id slap a used one in and run it, I mean seriously as long as it works keep in mind statistically in our 40 year old cars were 3 times more likely to die in a serious crash.

This only shows back to 84 and this shows your over 2x more likely, so if your really really worried about safety maybe a newer car is for you. You can only do so much with our old junk.

And now the National Highway Traffic Safety Administration (NHTSA) has released data compiled as part of the agency’s Fatality Analysis Reporting Systemthat confirms the notion that newer vehicles tend to be inherently safer than older ones.

Specifically, NHTSA determined that a higher proportion of passengers in more-dated vehicles are killed in crashes than are those riding in recently minted models. The difference in fatality rates between vehicles built prior to 1984 is more than double that recorded for models sold between 2013 and 2017.

To quote the study’s findings, "Using the most recent fatal crash data, this analysis supports previous research in finding that a higher proportion of the occupants of older MY vehicles suffered a fatal injury. In addition, the proportion of vehicle occupants who were fatally injured increases with the age of the vehicle."

Specifically, here’s how NHTSA’s data breaks down the frequency of fatalities in crashes by model year:

Haha, never been worried before... it's actually for the passenger side. Got a 1yr old now and just looking to the future. I'm actually trying to fix the old one by replacing the plastic with a metal piece. I'll do some tests afterwards to make sure it actually works and post some pics. 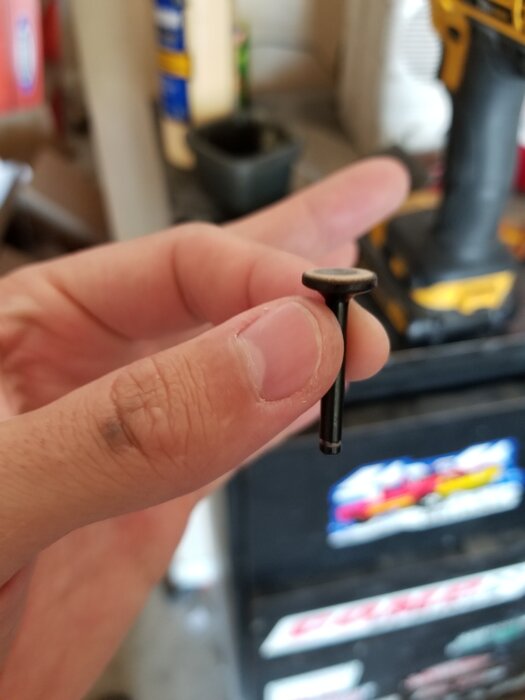 Like X, I got curious and pulled the cover off one of mine and,,,,,,,,,,,I'll be darned, it is plastic. Drivers side is an NOS unit I got a couple years ago. Passenger side is fine but I really should get the webbing replaced this winter. I say it LOOKS fine (unlike the drivers side did) but I'd hate for the unthinkable to happen with a certain red head woman of my acquaintance riding shotgun. Of course, if my car gets wrecked you may as well shoot me anyways and get it over with. Not literally but you know what I mean.

I've manhandled hundreds of those seat belts and this is the first I've heard of one breaking at that location. By the looks of it, the seat belt webbing has seen much better days, as well.
There are company's who rebuild seat belts so they might be the ones to ask – but it sounds like you might already be on it.

If you to the belt out and apart, be sure to change out the grease inside of them.
BudW

Just replaced the plastic piece with the metal and put it all back together. Seems to pass the tilt/ gravity test. 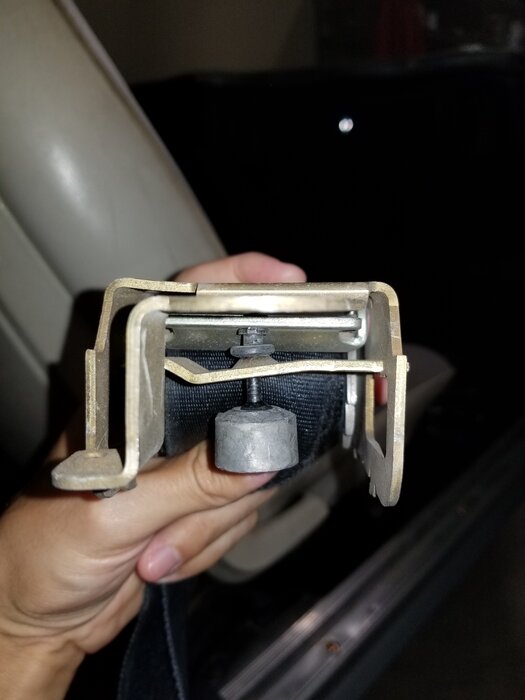 Hope your confident, they might of picked lightweight plastic for a reason. Now if you ever have an accident and it fails you will always wonder if you made the right choice.

Id have to go look, but doesnt it lock and stay locked until pressure is removed? If so even if the plastic broke in an accident it would still have done its job and only needing replaced. maybe? Im just thinking here.

Now what about that 40 year old webbing?

They do lock and stay locked until the tension is slacked up, unless the car ends up at a severe angle or something.

I remember when my car had the unfortunate incident 31 years ago, they locked instantly but then were free a second later. Gave me and my buddy a diagonal "racing stripe" across the chest. Oooh, that's going to leave a mark, lol.
X 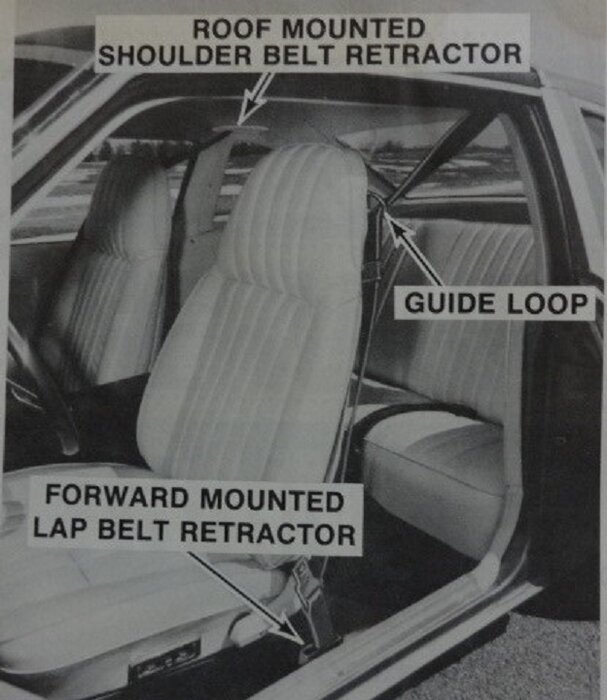 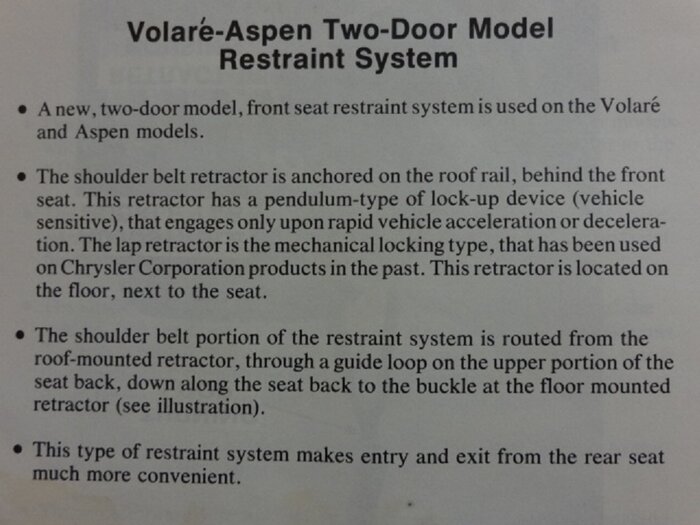 Good to know there's still a separate lap belt restraint as a backup. I do have a replacement system to install once I start consistently driving with a passenger/ once the kid is old enough to ride in the front seat. Right now I drive on my own 99% of the time. That being said, it's a pretty simple system and I can't imagine why a metal pendulum connection would make a difference from plastic. Maybe the plastic breaks in the event of an accident and it can't be reused? I'd assume it's because that piece is easier to make in plastic and allows for quieter operation.

PS. Anyone have a spare seat belt loop? I'm missing the passenger side.
X

Im sure your part is fine and actually pretty impressive you fabbed one up so quickly.

Like you wrote, maybe they are meant to break in a bad bad wreck so the whole belt gets replaced, im sure an old body shop worker or dealer guy would know.

On the later cars, there's only the roof mounted retractor. The lap belt is bolted to the floor so if the roof mounted one doesn't do it's job, you're screwed unless the belt doesn't slide through the buckle on impact.
You may be on to something about the pendulum being made to break on a hard impact. After something like that, the belts should be replaced because the webbing can be compromised if the sudden stop is severe enough to break the plastic.
I have an extra seat belt loop but need to see which side it's for. Stay tuned.