Vacuum Chamber in the Emissions System

Recently, my headpipe-manifold gasket on my slant six blew out for what I believe is the 5th or 6th time in the 5 years I've had the car. It became a problem after the rebuild, and the gaskets I used were asking for less torque than recommended from factory; 15lb.ft difference. And, since it was blown out anyways, I decided to run open manifold for a little while out of curiosity. Unfortunately, after removing the stove pipe, I neglected to tie off the subject of this thread, and the 3.7 liters of pure American Bald Eagles were simply too much for Canadian plastic. I have attached a few pictures of the aftermath, as well as some diagrams that I was referencing.

In the diagrams, there appears to be no listing for a "Vacuum Chamber SOP". This part was between the EGR valve and one of the CCEGR valves (located at the water neck/thermostat housing). In the diagrams, it only shows one CCEGR valve, but I have 2. Also, the diagrams show one vacuum hose from the CCEGR going to the EGR, but I have one line coming from the side of the vacuum amplifier as well as one line from the CCEGR. To me, based on the vacuum diagrams, someone REALLY went to town on the vacuum system, a lot of plastic connections all over the place, which doesn't seem indicative of a "stock" system. I'm a novice at best, so I could be wrong.

Anyways, this chamber had 3 nipples on it (two on the bottom below the valve, and one above). The two grey lines were on the bottom, and a lone black line was at the top.

Currently, I have a three way vacuum connector holding all the lines together, since two of them I could feel vacuum and the other I wasn't too sure about.

Anybody have any idea what this goofy thing does for the EGR valve? Do I need to worry about finding a replacement, because as of right now Rock Auto does not list the part and I could only find the part number on arizonaparts.com ?

Thanks in advance for any help you can provide, 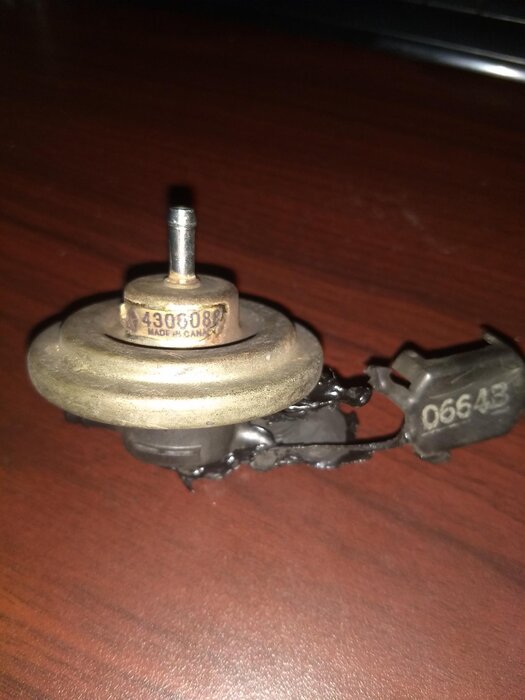 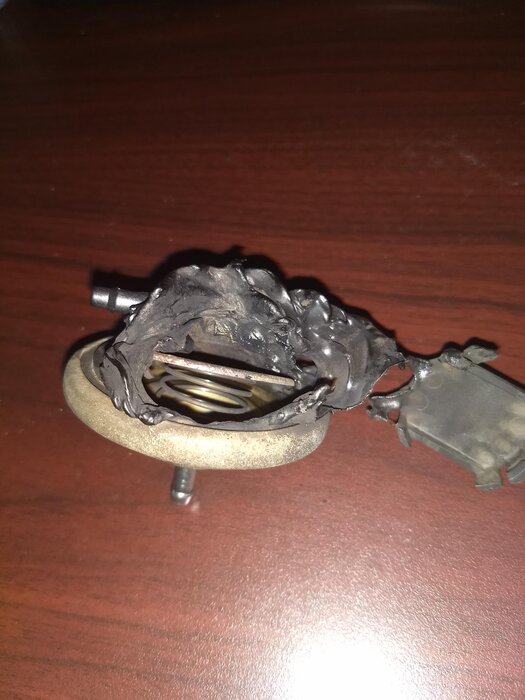 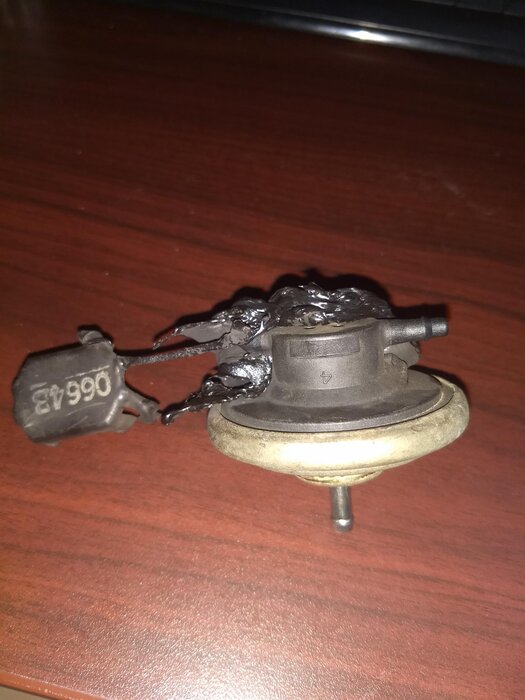 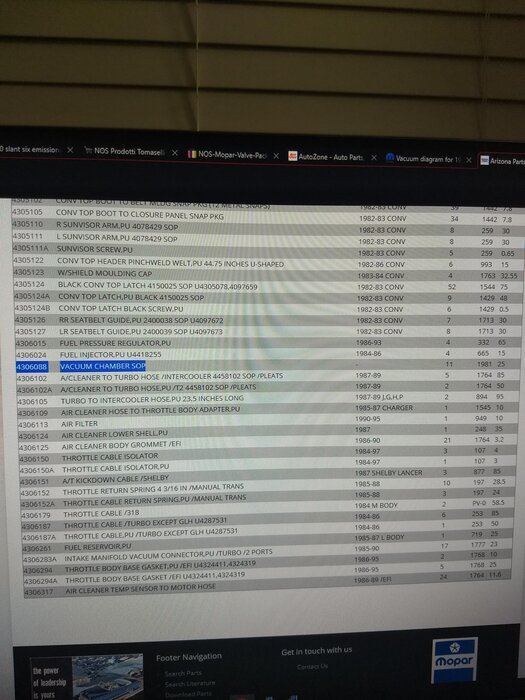 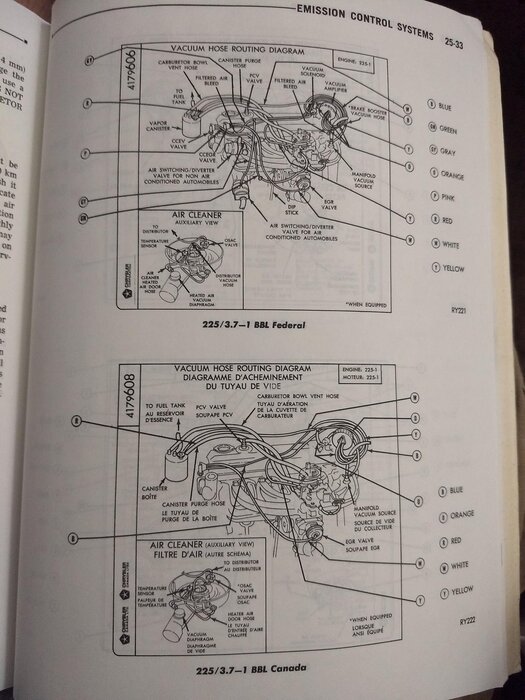 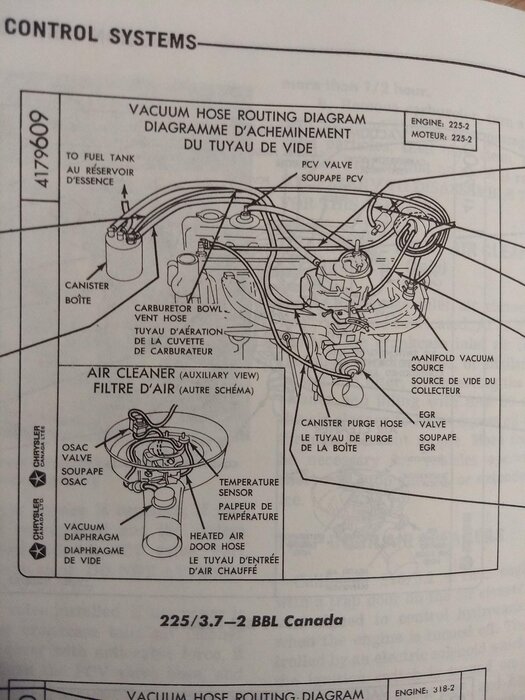 Red_Barron - keep in mind that the car was originally a 1 BBL.......that gizmo isnt showing up in the 1 BB pics anywhere?

What year car are we working on?

BudW said:
What year car are we working on?
Click to expand...

So I went out to look at the vacuum again. So the EGR line is split, as you can see, and runs to one of the thermal sensors. There's also a line coming off of the air pump purge valve. The last line runs from the other thermal sensor to this branch as well as the back of the BBD and the vacuum choke assist. shadango was looking at a stock 81 slant six, and saw there was a check valve in line. I am missing that part. Any concerns with this set up?

To me it seems very molested, but again I could be wrong. Just seems really messy for oem.

My guess is the owner had the vacuum chamber laying around, and the original check valve failed, so he did some butchering. Just seems like way too many connections. 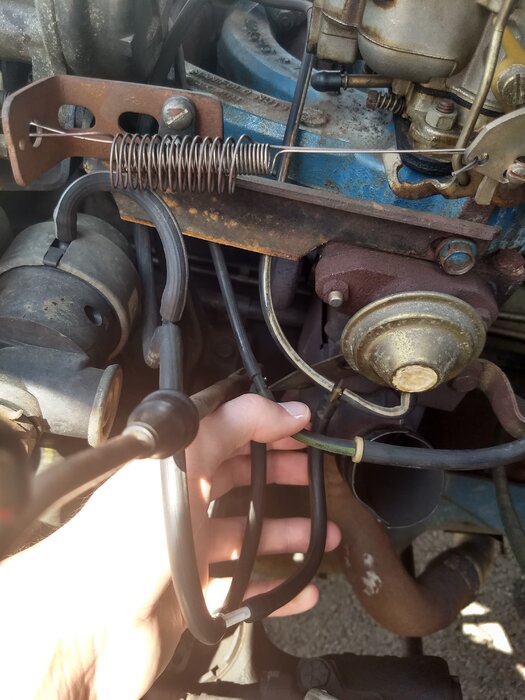 Mikes5thAve said:
If the vacuum sticker is still readable on the fire wall that should give an idea what's right and wrong
Click to expand...

I was looking at it, and half of it is rubbed away by the weather stripping. Since it runs, I don't think there's too big of a problem.

The "SOP" isn't part of the part number or name of the part. It means the number listed is "Stamped On Part" (or something similar to that) and isn't necessarily the actual catalog p/n.

Location
On the Circle of the earth, Southern Man,Canada

next
When it is engaged;
it has to be engaged progressively, So you can't feel it in the cab.
In the early days of EGR, on a V8, it could be controlled by venturi vacuum.
Later, as control became more regulated, it was changed to manifold vacuum. Still later more EGR was mandated, so controls got more complicated. Eventually there was not enough manifold vacuum to do the job. So a vacuum reservoir was introduced to store vacuum produced while cruising, so now they had a constant source of vacuum. But it was higher than they needed so they figured out new ways of using it. One of those was to use another thermo-vacuum switch, to shuttle the valve from the vacuum amp to a second source, back to the venturi vacuum. And another was to vary the vacuum from the reservoir with an amplifier.
The goal of all these controls was to inject as much EGR as possible at all times in accordance with the first three laws of EGR as listed above.
EGR has exactly one purpose, which is to reduce the temperature in the chamber to prevent the formation of NOX, which, they say, contributes to pollution.
That reduction in chamber heat, of course, costs you power and fuel mileage, because heat is the driving force of making power..
But you cannot just disconnect it because all your timing controls and fueling is engineered to work with that stinking EGR . If you defeat the EGR, your chamber heat will go up, and that heat may drive your engine into detonation........... until you re-engineer your timing and fueling to work without it.
IDK what that valve does on your system.
I have a 1980 Canadian Volare with a 77 Super Six in it, and I threw all that EGR stuff away. And I had to do all the things I mentioned. But my SS has a 9.5 compression ratio, and a modest cam, and I spent many many hours re-engineering that Distributor and that 2bbl, to get them all to play nice together.
All the best in your search.
You must log in or register to reply here.
Share:
Reddit Pinterest Tumblr WhatsApp Email Share Link