Anyone have an idea as to where a person can get a replacement crossover pipe for an M Body that doesn't have these two idiotic pre-cats welded to them? I own 2 M Body cars, 1 Chrysler, 1 Dodge, both 1987, both have these mutations on them. The Chrysler Fifth Ave. is starting to experience the left mutant beginning to clog and restrict flow, and actually got so hot at one point after sitting for awhile, that after it ran for a few minute at cold idle speed, the cat was actually glowing red!! I want to get rid of all four of these puppies, and a replacement crossover pipe without the cats would be a welcomed change. I've looked everywhere for one of these, and no luck. I'm about ready to go to a custom muffler shop and have a custom bent pipe made for them if possible. Whatever the case, these have got to go!

Emissions regulations aside (not judging, rather pointing that there may be specific state/provincial requirements re: catalytic converter use) the shop job to cut these out and just toss a pipe should be fairly reasonable. I would think a couple hundred bucks at most???

If the pipes are in OK shape, drop them and bust the honeycomb out with an air chisel and two long chisels welded together. Put it back up there and you're done
M

As far as emissions regulations are concerned, once a car in the state of Pa., reaches 30 years old or older, smog and pollution controls, (emissions), no longer have to be maintained. There is a main catalytic converter further underneath the car, ahead of the muffler, that will be kept. It's not the problem. It's the 2 pre-cats tucked up underneath the exhaust manifolds, that are the headache. And, ironically enough, I'm not even sure what they are, actually. I've done research on these, and have found them to be called "resonators", from one source, that were added to keep noise drone to a minimum, inside the passenger compartment. Another person, who actually works in a muffler shop, called them "pre-cats", that work in conjunction with the main converter. Either way, there is no "factory or aftermarket replacement" for these, thus making it impossible to replace with new. This is why the state of Pa. lifts these requirements, because after 30 years, getting the parts new to replace these items with, becomes virtually impossible. As far as opening up the center with a chisel, don't know at this point, if that's a possibility or not.

Emission controls are a federal law that some states make even more strict, your muffler shop can tell you what can be done.
M

Well, today I cut the crossover pipe off of an old '84 fifth ave., that was destined to go to the scrapyard, after I completely "stripped" it of everything I wanted to hang on to. In doing so, I got a real good view of what I was dealing with, with my '87. These 2 mutations, (as I like to refer to them), are actually miniature catalytic converters, tucked up under both manifolds. They aren't "straight", however. As such, they would be a real PITA to try and hollow out with an air chisel, as the one fellow suggested. So, I will see if the muffler shop can be of service to me in this grand endeavor, by constructing a similar pipe w/o the cats. The other solution I have considered, is to remove the crossover from the '87, and cut the covers off these bad boys, empty everything out, and weld the covers back on. Thus, not having to reconstruct the shape and bends of the pipe all over again. I have always been a big fan and supporter of Chrysler Corp. vehicles, but boy did they drop the ball on this one! Three catalytic converters on one vehicle?? Was this REALLY necessary? And where they placed and positioned these two, directly underneath the exhaust manifolds, they must have been smoking something good! Never saw something so ridiculous in all my life! Makes me wonder how others are dealing with this nonsense. If you have had a similar situation dealing with this crap, feel free to let me know how you dealt with it. I would love to hear about it.

A lot of cars from 80s on have those pre cats it wasn't just Chrysler. They did what they had to to meet the emissions levels.
You used to be able to get a y pipe without them, the same pipe from the late 70s cars. But a muffler shop should also be able to make something up.

Don't be surprised if they will not help you out if you don't want to replace the cats, it's actually illegal for them to not put them back. The fine in the past was $10,000.00 and I haven't heard it went away.
M

Well, the cats are gone!!! It's amazing what you can do with a cut-ff wheel and a mig welder...lol. Eventually I think I'm going to put a set of duals on the Fifth Ave., with a set of tubes off the block if I can squeeze them in. I saw a video on here somewhere, where a guy had a set of tube headers on his Fifth Ave., and god, did it sound fine. Not Super Bee fine, but not bad at all. If anyone knows if a set of A or F body tubes will squeeze into an M body, let me know. I may have to make another alteration. Right now, everything still looks original, which IS a plus, I guess. But, boy those duals sure look tempting!!

I have a set of A-body long tube headers in my, 5th Ave. fitment is just fine. They go in pretty easy from the bottom. I took this time to replace my motor mounts and install a Mopar mini starter too.
M

F is the same as M. Most A stuff is also supposed to fit.

I had previously used the following 1-5/8" primary tubes headers:

I liked the Hooker tubes better. They were just better made...the flanges were thicker and the welds all around just nicer. These were ceramic coated, which actually lasted a very long time, considering that the car is a summer only ride and the pipes are subjected to just an occasional heat and plenty of humidty just sitting there otherwise.

These are pulled off of my coupe now since I'm tossing TTIs in there for my W2 build, but I like them enough that I figured I'd keep them for some other use.

Oh, worth noting, with most of the F/M/J-body installs you normally have to tweak the gear selector linkage I think, someone with this install can probably confirm. I went to the cable setup so this cleaned-up the area down there quite nicely.

I have the Doug's 453 on my Mirada (same fitment as an M or F body). They fit above the steering linkage. I don't know how column shift would fit, since I have converted to a cable shifter, but I do have the original kickdown linkage in place. They do require a mini starter and either a short filter or a 90 degree adapter. 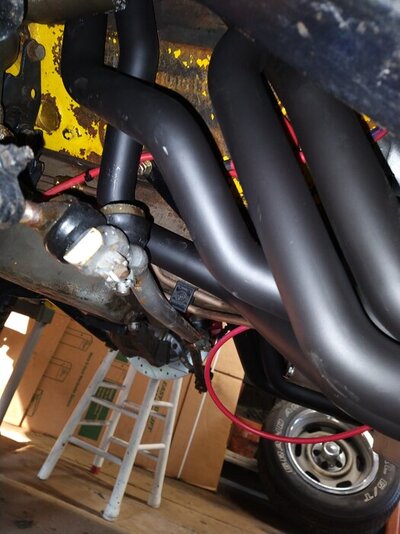 Catalytic converters are required to reduce carbon monoxide (CO), unburned hyrdrocarbons (HCx), and nitrogen oxides (NOx) since the early to mid 80's. Prior to that HCx was the primary concern then CO was added. Earlier models could handle CO and HCx in a single unit because all that was required was to add an oxygen so CO became CO2 or carbon dioxide and HCx became H2O water vapor and CO2. A catalyst can add the oxygen at less than combustion temperatures but still pretty damn hot for us. More HCx and CO forms when the air/fuel mixture is rich. So lean the mixture and and these are reduced but combustion temperatures increase.

Adding NOx to the requirement complicates matters because NOx's only form at high combustion temperatures like those that occur in a lean burn combustion. Nitrogen is usually very inert and does not combine with other elements at normal environmental conditions. But once combined, it can be equally as hard to separate. It requires a different catalyst and avoidance of the high temperatures which created NOx's in the first place. So early catalytic converter systems which had to address NOx along with HCx and CO had separate converters sometimes one for each or three if you have been keeping track. And for dual exhaust systems you can see as many as six converters. So having Only three is not that bad, but still sucks.

But with the reduction in size of passenger vehicles which has occurred there has been advances which allow for the return to only a single (more complicated) converter which can handle all three exhaust pollutants.

Even the 700+ HP factory vehicles have to comply. Yes, converters impart restriction. But it is entirely possible to control emissions and produce gobs of power.

Sometimes you are at the mercy of the inspector. When your factory emissions label says catalyst, your vehicle is legally required to have a catalytic converter meeting the standards of the model year. There are times though that even if you equip you vehicle with a more modern and efficient unit, the inspector does not recognize the fact and can fail you on emissions.
You must log in or register to reply here.
Share:
Reddit Pinterest Tumblr WhatsApp Email Share Link