I started talking about this is another post so decided to break it out on its own.

As you are aware electronics gets old, caps dry out and we'll you can repair and rebuild but things got better, receivers more sensitive, cd players, more watts, speakers moved on in car audio.

I couldn't find the right fit for my car but I think got something pretty nice.

I made a new back parcel tray. 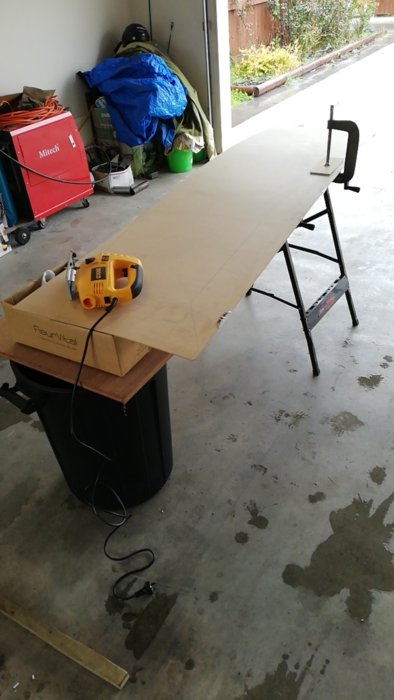 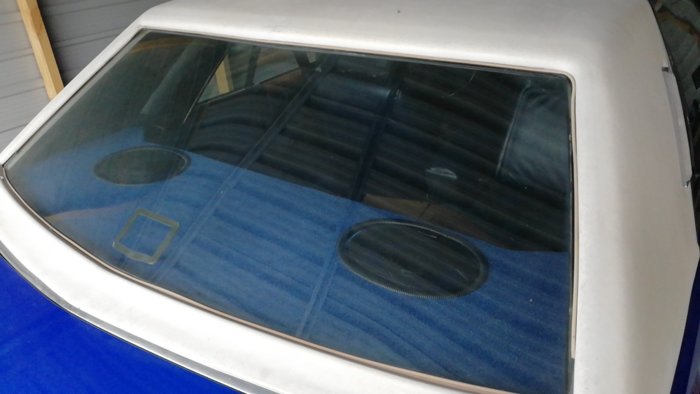 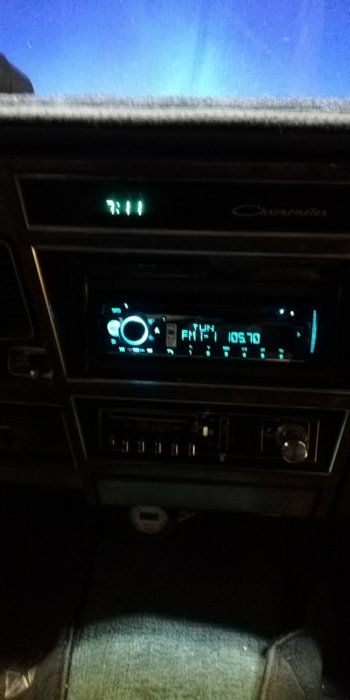 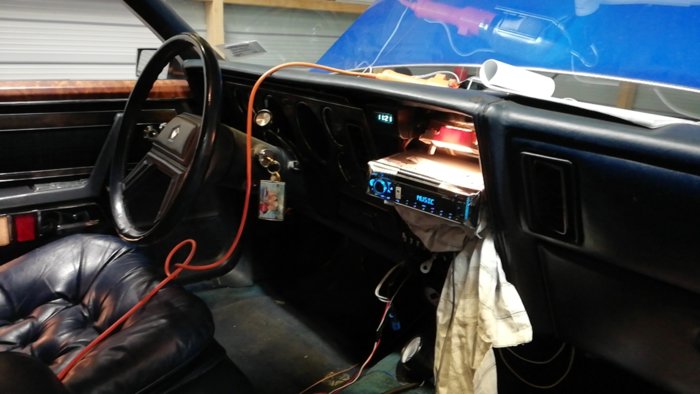 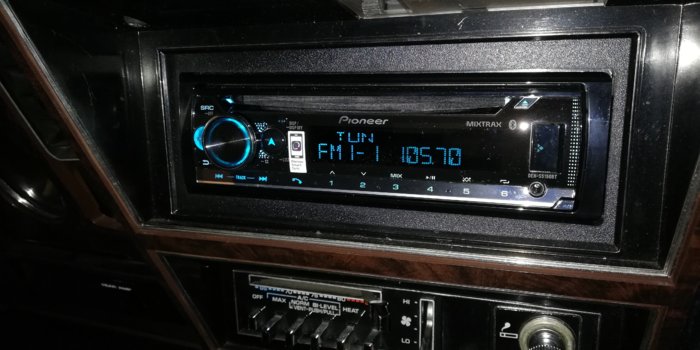 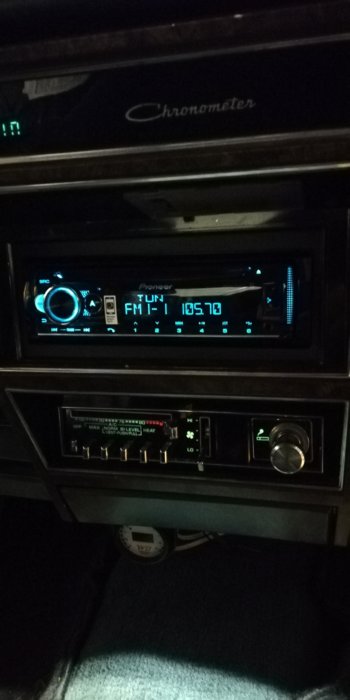 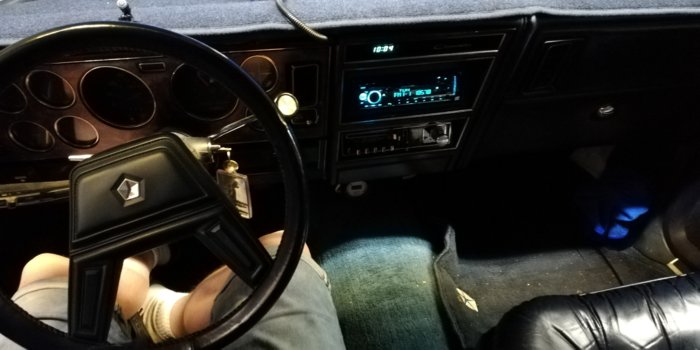 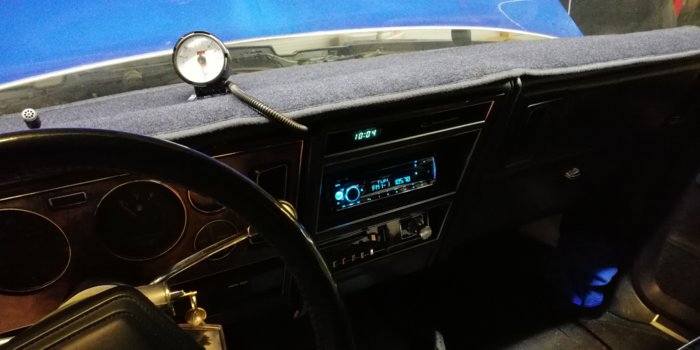 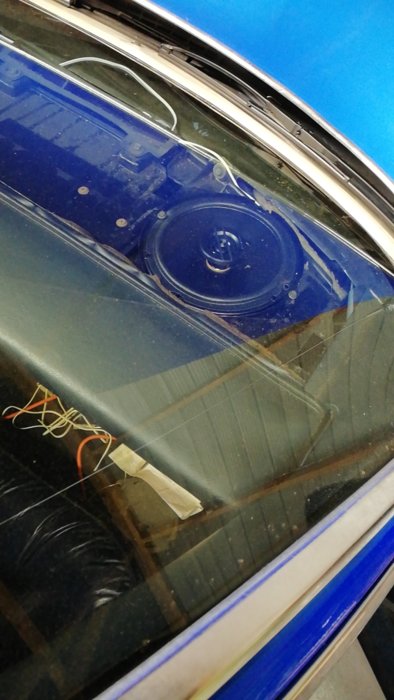 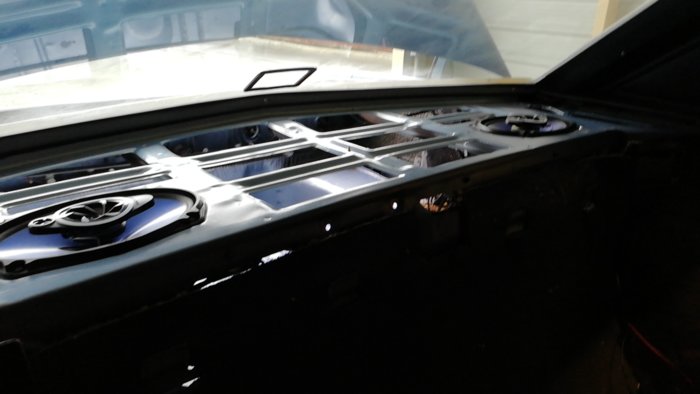 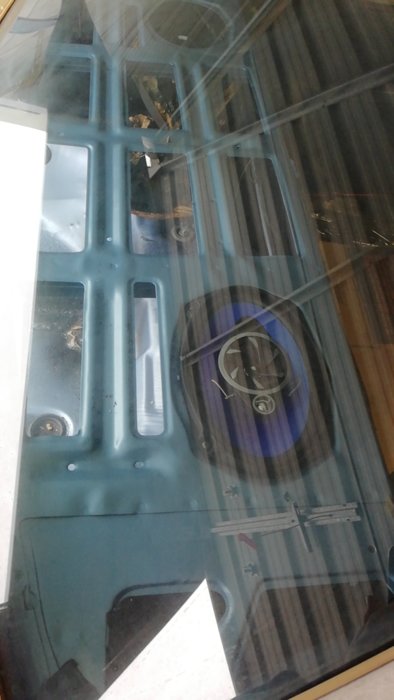 Looks good Bruce. Right now I'm doing the same thing to my Doba, I've even got the same head unit. I used Pioneer 6x9 tri axials in the back deck but my package tray was in pristine shape so I mounted the speakers under the tray so I didn't cut the carpet and it can be returned to stock if needed. Doing this killed some of the higher frequencies because of the carpet covering the tweeters. I want to replace the dash speakers like you did to hopefully get a brighter sound. What is involved getting the top plate off the dash? I looked and didn't see an easy way but maybe I'm missing something. Thanks for any help.

Top plate is clipped on, you just need to gently ply up and it will start to pop off, no screws or bolts.

Yes I made new tray and carpeted it, cut holes to let sound out.

I am very happy with the results, 6.5" is a bit of a squeeze up front, I would look at something smaller, but the 6.5" came in the package deal for the stereo so I managed to just get them in!

Thanks for the help and thanks for the tip on the speaker size. I'll pull mine and measure before I buy any for the front.

The factory speaker up from is 5.5" I think, I was looking at some 5.25" pioneers but the problem, was they were just a little small on the mounting holes, I am sure you could work something out though!
B

Looks like a nice clean install. I have a 30+ year old Pioneer cassette deck in my Mirada that I put in back in the day. (Still have the stereo AM/FM it came with, wonder if it still works? I even have the AM/FM that came from my 1970 RR that I had crushed in 1980! Wonder if that is worth anything, though it has been on the shelf for 39 years, wonder if it still works?) Top of the line, a Supertuner 3, remember those? I really should upgrade, maybe to something digital that would take an SD card like my other cars, but right now I am having what I think are ground problems for my antenna and I do not want to upgrade until that gets figured out. After my fresh repaint last fall I got crummy radio reception. Took off the inner fender well and ground a little but that made little difference. What I do now is use a cheap Bluetooth FM transmitter connected to the 3000 songs in my phone. There is enough reception for that but would like to have some radio now and then. Any ideas guys?

Maybe you have too much ground. There are usually rubber insulators to keep the antenna mast from coming in contact with the frame.

Go to ForBbodiesOonly.com and offer it for sale there. There are some who wants stock radios (for resto's) and some who want cores for radio upgrades (working or not).
I would say there is a good chance your radio still works, if it didn’t get wet – if it was working when removed, that is. There are companies who will restore those older factory radios as well.


Billy007 said:
I am having what I think are ground problems for my antenna and I do not want to upgrade until that gets figured out.
Click to expand...

The antenna wire does not ground at the fender, per se. The antenna cable has an outer sleeve (stainless mesh wire) that goes on outside of wire that grounds the radio chassis to the fender. It doesn’t ground the radio electronics though. The mesh wire is to keep electrical interference away (being picked up) as much as possible. It won't stop spark plug electrical interference sense that is being radiated out past the fenders.

A good way to test existing antenna, is to find another known good automotive antenna (almost any brand, OE or aftermarket), and plug it into the radio. Take the cable/mast outside of car and keep the antenna mast from touching a person or metal object. Turn on radio and test.
If signal is better, then you have a bad antenna cable. The antenna mast is just a piece of steel (stainless?) and it can’t go bad (except for getting bent).
If signal is the same, then problem is most likely your old radio.


Going off subject a bit, I have a few spare Chrysler radios. What I did was took one and wired it up to a 12v power supply. Took four 6x9 speakers and enclosed in plywood boxes and put in the four corners of my garage. Took a cheap Pull-a-Part antenna assembly ($10) and mounted on roof and used an eBay automotive antenna wire extension. Flip a switch when I walk unto the garage and instant music. With the radio pre-sets, I can also listen to the OU football games (or other things) and back with ease. Can even pick up radio stations about a four-hour driving distance away, sense the antenna is high and I live on a hill.
The 12-volt power supply is suppling power to radio full time (for clock and memory) and the switch I wired in turns on the radio (like the ignition switch would). If I used an older mechanical (like F-body) radio, I wouldn’t need the clock/memory power – but I prefer the electronic tuning.
BudW

Running a pioneer head unit DEH9400BH with two Rockford Fosgate 200 A4 amps. Memphis Audio 5&1/4 in the doors and 6x9s in the rear and two 10” Kicker subs in a custom made box. I am running magnum accessories so I have a 140 amp alternator 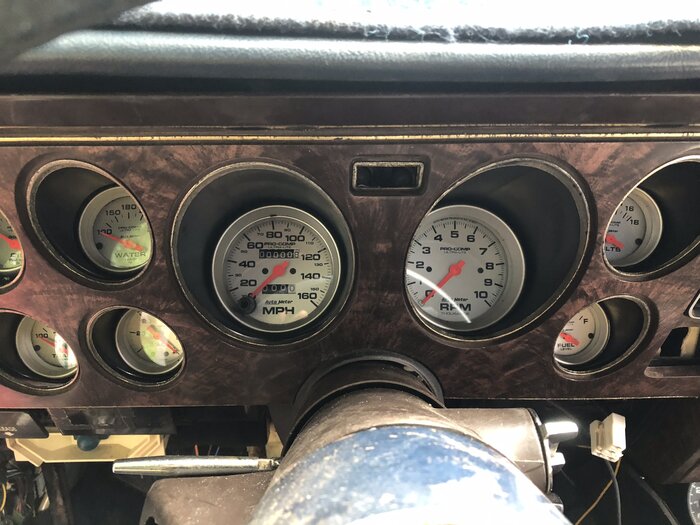 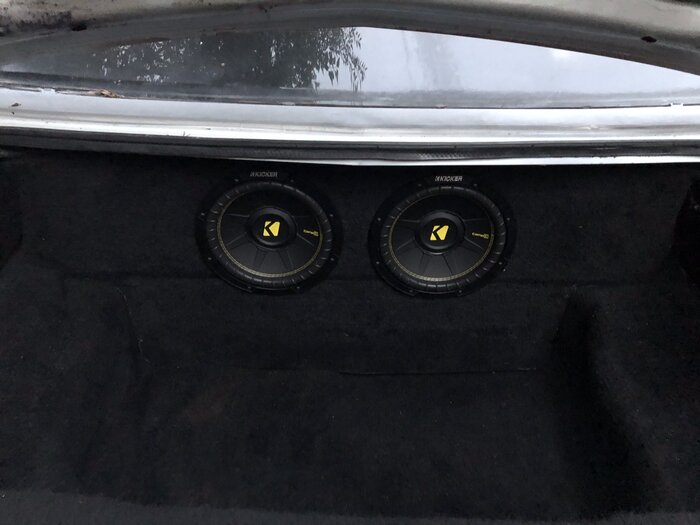 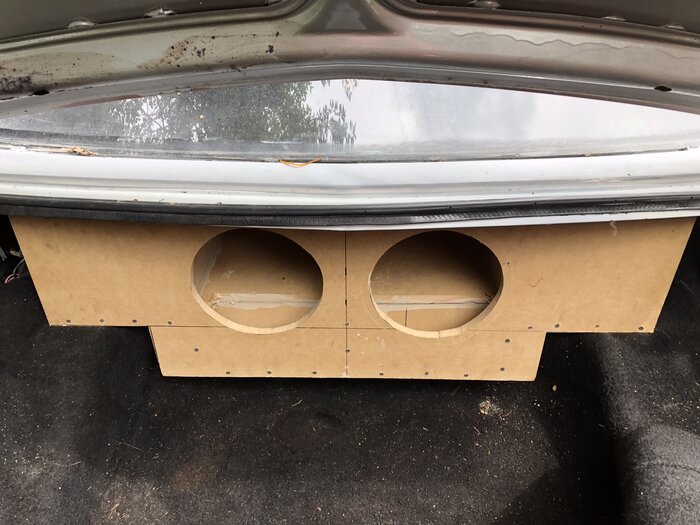 Also, nice work on the dash gauges! Make any notes of what was (gauges) used and/or pictures of that install?
BudW

@Slodoba Got any photos of the sub box construction? I've got similar setup with a single 12" facing upwards, but I'm thinking of going to dual 10" like yours.
K

If you are going to build a new box anyway, just build it for 2 12", using the existing 12" as one of the two. Save a bit of money, and much better bass.

If you are going to build a new box anyway, just build it for 2 12", using the existing 12" as one of the two. Save a bit of money, and much better bass.
Click to expand...

Not room under the package tray to accommodate 12" subs. At least from what I measured. 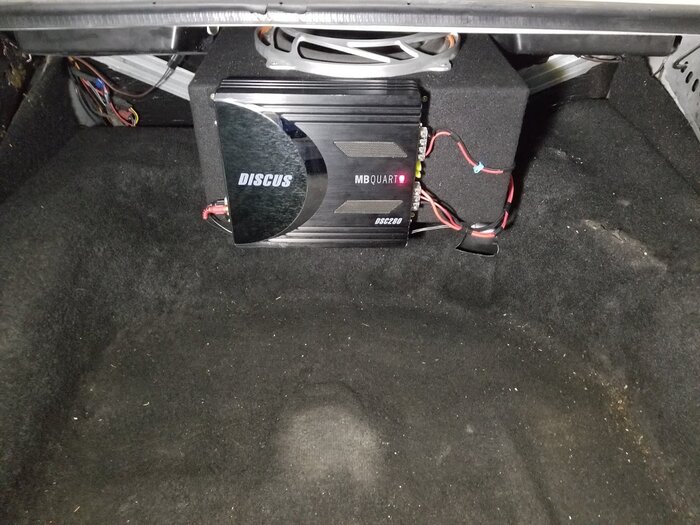 What about facing them out the ends of the box? 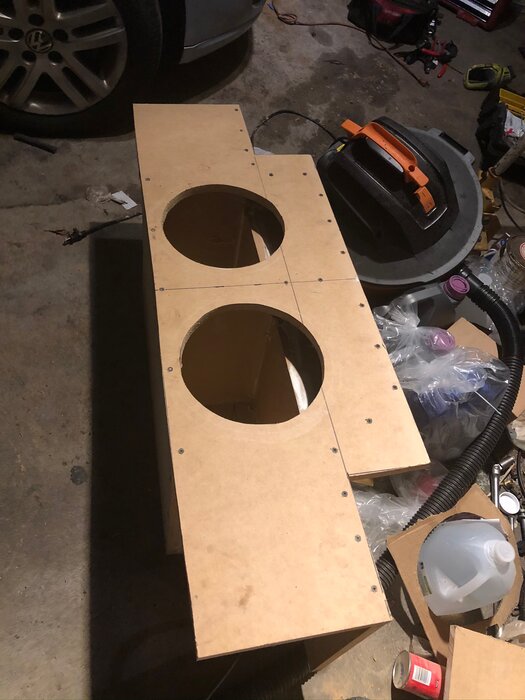 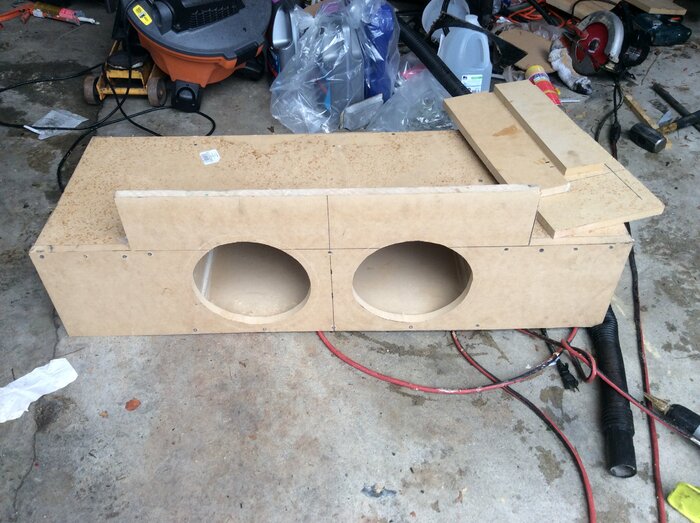 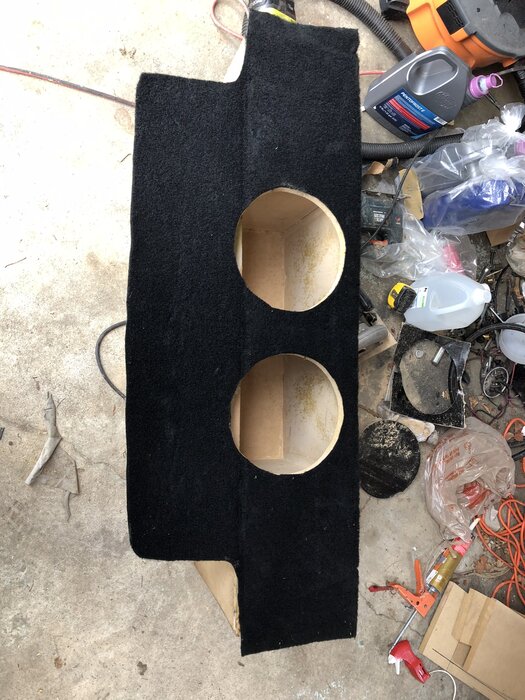 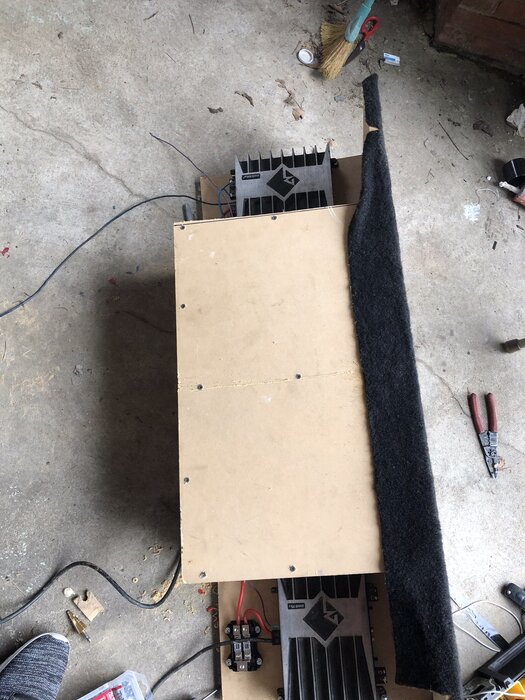