what Vacuum line is this?

been figuring out whats wrong with my fury. several Vaccum lines have been plugged with screws causing a blevvy of leaks thus the clicking noise and stall. one last one needs to be fixed. this one at the rear of the carb is plugged with a big screw and cut. 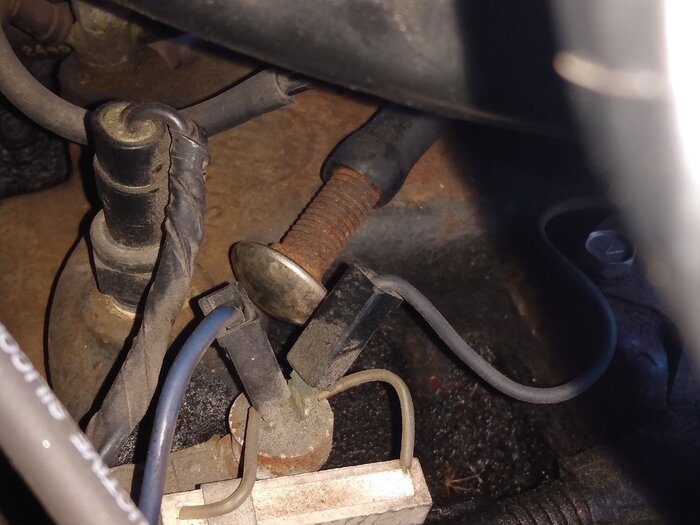 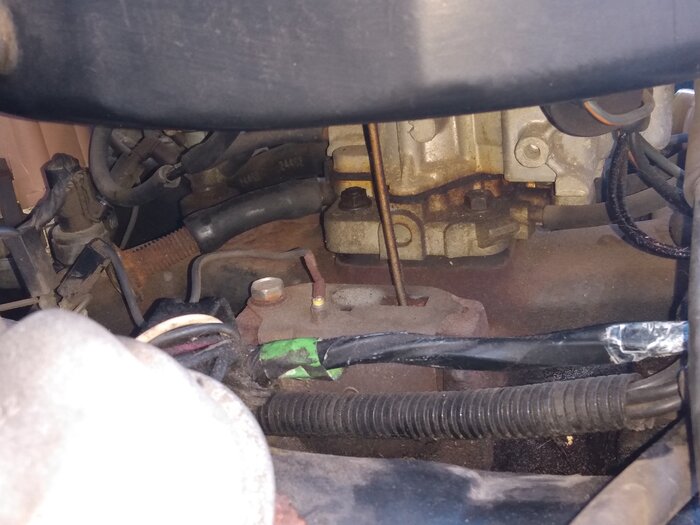 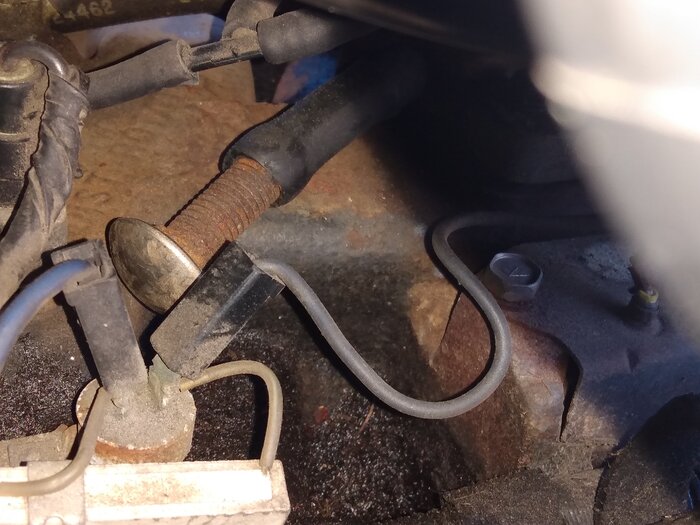 The big ones go to PCV valve and the charcoal canister. Some years also brake booster, some years brake booster comes off intake manifold.
Check the vacuum hose sticker under the hood.
If the carb isn't original it could be one that isn't needed.

Coming from the base of the carb and the size, it should go to the PCV valve.

its an original lean burn equipped car. not sure why this line was cut. can someone point me to the location of where this hose leads to? also what size is this hose? thanks

one big line goes to the PCV valve. can't figure out where this plugged one goes. as far as i can tell this car has a factory carb. car has been shaking a lot lately. really at a loss as to what is wrong here. 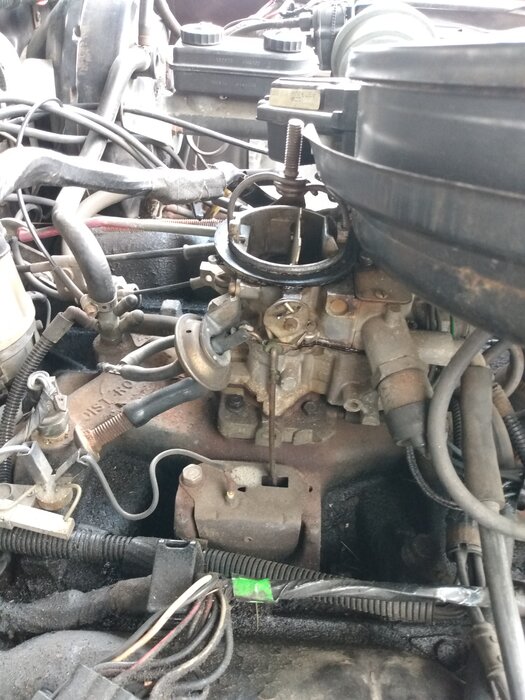 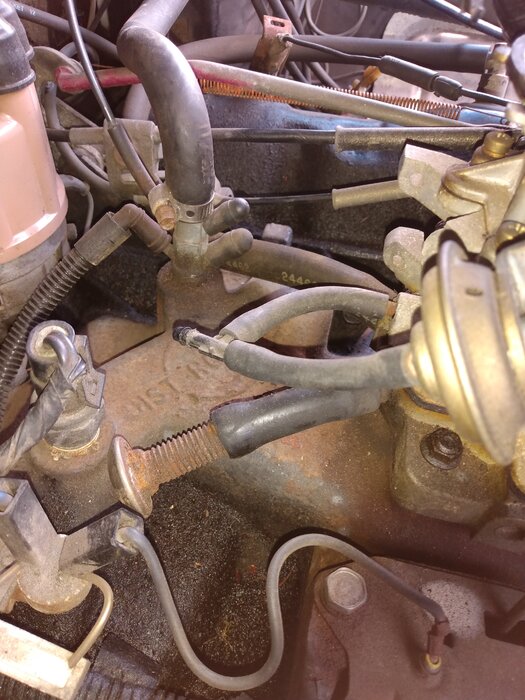 this plugged line is located to the left side of the car. one to the right is hooked up to the PCV valve

Well what I see right there in that last pic is a BIG GAPING vac leak. See the 'T' in that line?

So that channels the manifold vacum to your choke pull-off (which is that puck-like pot the run lines to) and usually is also connected to something else that need vac signal. But in your picture it looks like tha end of that 'T' is wide open...so when the car is running you should in fact feel air getting sucked in-there.

Do you know whether that is a Holley 1945 carb?

My '80 FSM 'Engine Performance Manual' book shows the complete carb hookup here...I'll scan and upload the first couple of pics, that should help I think. 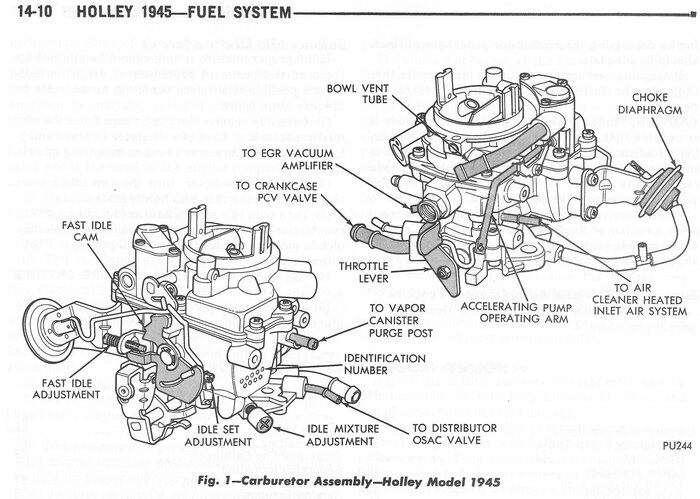 If it's stock it should either be a Carter BBD or a holley 6280. I don't think it's a BBD with that solenoid sticking out the side.

Like I said in earlier post there should be a sticker under the hood that shows where all the vacuum hoses go. It's either on the hood or the top of the fire wall by the vent. ANy nipple that doesnt' have a hose shown should be blocked off.

the T you see open came off when i took the air cleaner off. I've put it back together. i'm mainly focused on the hose with the screw in it. by looking at your scan maybe this is the crank case hose? kinda hard to tell. this hose is located under the choke diaphragm. has two hoses at the rear one which goes to the pcv but this one located to the left side of the car is plugged with a screw. i'll look at the underside of the hood and see what it says. car is a 1988 fury if that helps
Last edited: Jul 1, 2020

here are the lines. looks like maybe that one actually goes to nothing 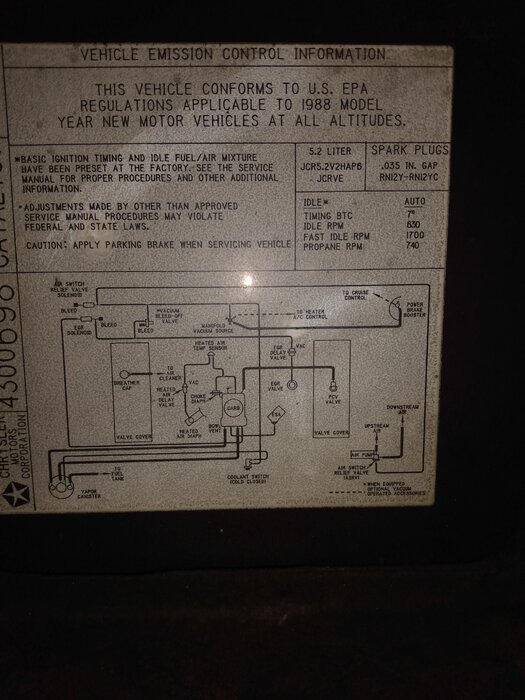 I see there's another port that goes to the PCV valve. It is entirely possible, if this isn't the original carb, that port is unused and needs to be plugged. I'd get an actual vacuum plug instead of a bolt shoved in a hose though.
Last edited: Jul 2, 2020

think all i need to do is replace some hoses. one that goes to that T is also a bit tough and cracked. i'll see if i can get an actual plug 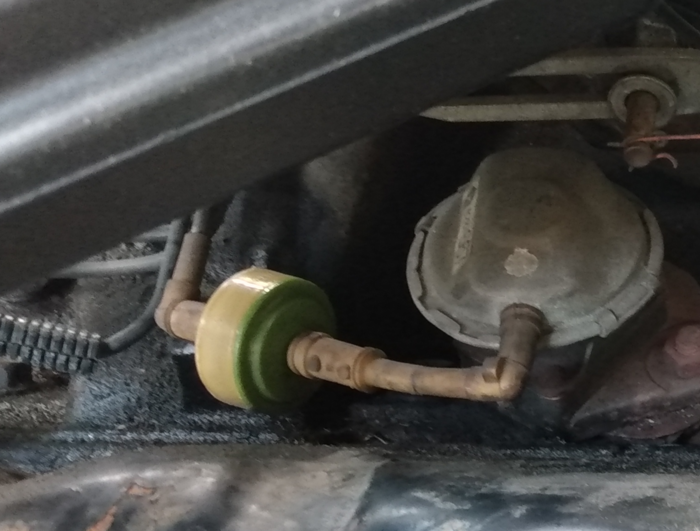 this part was also previously plugged. i've put it back together now though

A few questions and a few answers.

The first thing was what year car he has, but he answered that with this photo: 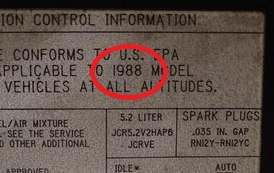 The Holley 1945 is a single barrel used on /6, so not applicable in this case.

This is a picture taken from my '86 Fifth Ave (also showing a Holley 6280). It looks to me that someone changed carburetors at some time and/or changed the intake vacuum tree for the brake booster. I think the former is more correct than the later.
The brake booster, according to my vacuum hose diagram shows to hook up to rear of carburetor in addition to the PCV hose: 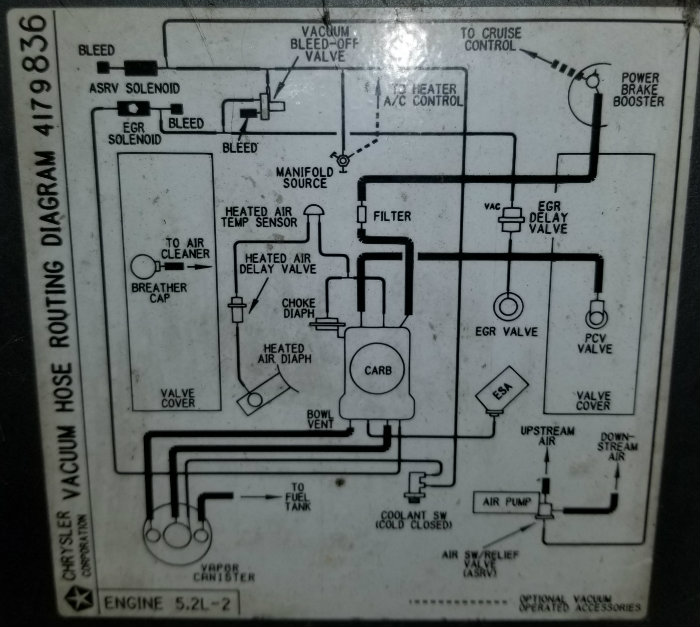 Aspen500 said:
if this isn't the original carb, that port is unused and needs to be plugged. I'd get an actual vacuum plug instead of a bolt shoved in a hose though.
Click to expand...

I do agree with this statement, Go to parts store and get a rubber (or soft plastic) plug and stop this port the correct way. That hose will split and will cause a large leak sometime in the future (sooner than later). 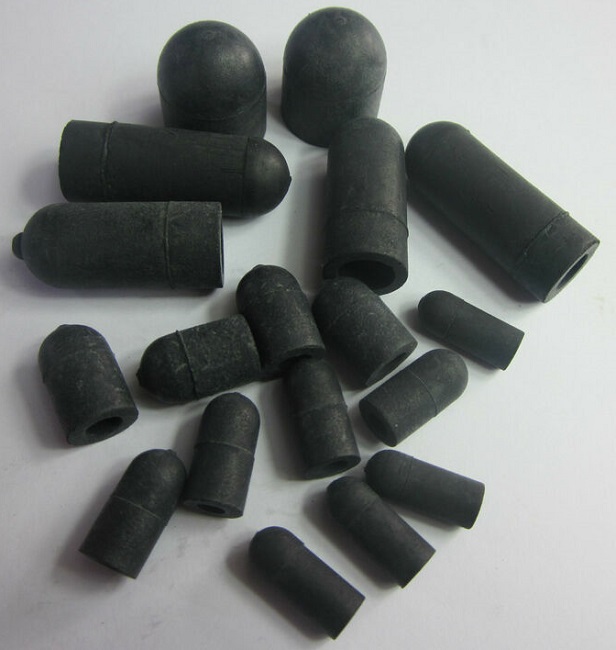 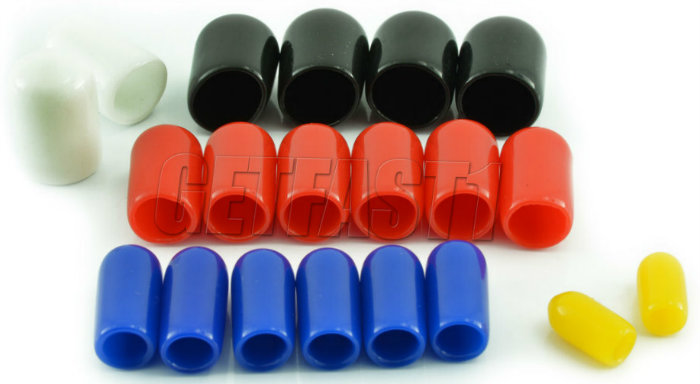 Actually. I would move the PCV hose back to the correct port – but that might not matter. 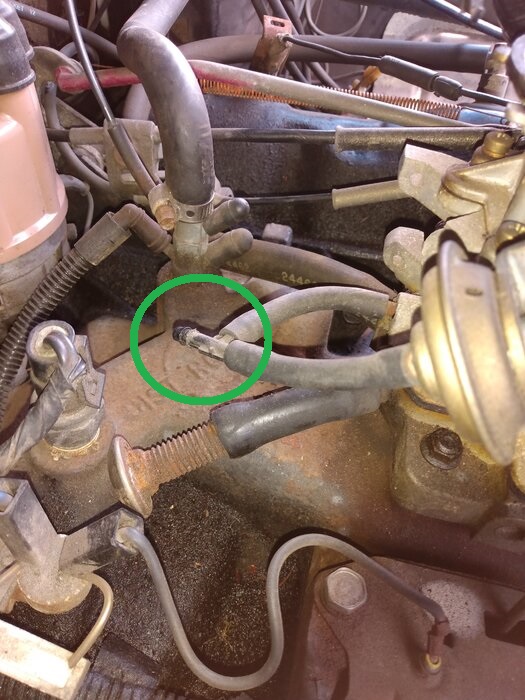 This picture (green circle) shows the disconnected “vacuum T” that might be the source of running rough. There is a hose going to air cleaner (heated trap door, over drivers side exhaust manifold, that connects to that “T”). When removing the air cleaner, I prefer to disconnect both hoses at the air cleaner. The one mentioned in sentence above, at the air cleaner temp sensor and at the computer. I then plug both with a Phillips or Torx screwdrivers – so engine "could" be ran with air cleaner off (which is hard to do if engine computer was disconnected, as well). That way, I recover my screwdrivers and pretty certain everything is re-hooked up before closing the hood (or what method works for me, anyway).
Another reason I disconnect the hoses at air cleaner/computer, is because heat causes the hoses at carburetor to get hard faster. the hoses at other end stay soft a lot longer (from lack of heat?) - so fewer chances of hose cracking/breaking. It is also faster for me to disconnect/reconnect at both ends. 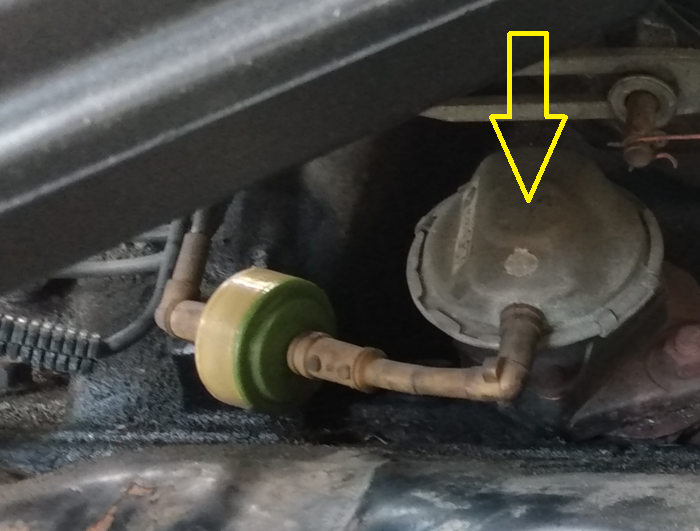 The yellow arrow is your EGR valve. I would bet (a dollar) your passageways inside of your intake are 100% stopped up from carbon deposits – which would render the EGR valve inoperative, IF the EGR valve has been disconnected for a couple of years or longer.
BudW
M

BudW said:
It looks to me that someone changed carburetors at some time and/or changed the intake vacuum tree for the brake booster. I think the former is more correct than the later.
The brake booster, according to my vacuum hose diagram shows to hook up to rear of carburetor in addition to the PCV hose:
Click to expand...

BudW said:
Actually. I would move the PCV hose back to the correct port – but that might not matter.
Click to expand...

To avoid confusion his vacuum sticker shows the brake booster coming off the vacuum tree and the PCV hose already hooked up to the proper port. The brake booster location switched back and forth over the years, you'd think they would have kept it consistent when everything else is the same.


BudW said:
This picture (green circle) shows the disconnected “vacuum T” that might be the source of running rough. There is a hose going to air cleaner (heated trap door, over drivers side exhaust manifold, that connects to that “T”). When removing the air cleaner, I prefer to disconnect both hoses at the air cleaner.
Click to expand...

He mentioned that one goes to the air cleaner. I also disconnect that hose at the air cleaner when taking it off, mainly because it's easier compared to either digging down to the bottom of the carb or getting it off the barbed T. A golf tee plugs it perfectly without affecting the hose.

i've replaced that hose to the tree. it has a minor crack at the bottom. i've had a leaking gas line replaced and i've plugged that port. seems this carb has definitely been replaced but i can't id what exactly it is. car has been rough lately even with my efforts to solve the vacuum issue. issues like shaking and stalling when put in drive. this seems to have all gne away after my last drive so i dunno. i can't seem to find anything out of place other than some old lines with small cracks which i'll soon fix. can't feel any air coming out of them though 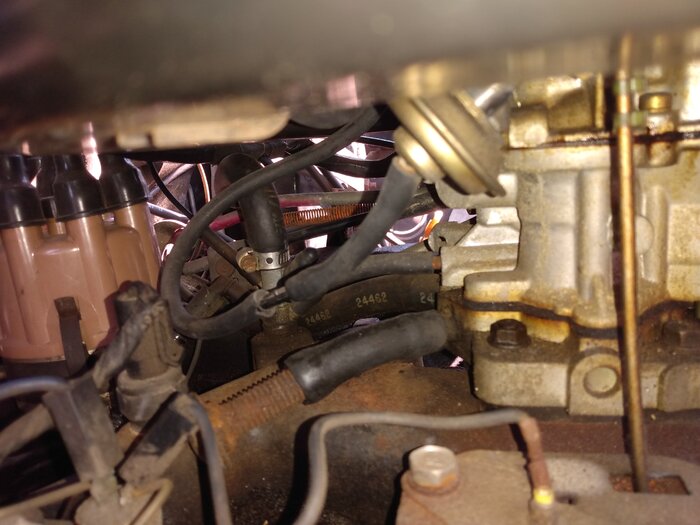 Yes it looks like it's right to the barbed end. You might have enough hose there to cut the cracked part off.

Mikes5thAve said:
Yes it looks like it's right to the barbed end. You might have enough hose there to cut the cracked part off.
Click to expand...

and do you recommend i clean the EGR valve?

Its not the EGR valve, per se. It is the ports inside of the intake going to the EGR valve that I would bet are stopped up (solid) with carbon.

If you are in a state that requires the EGR valve to function, you might have to remove the cast iron intake and spend a weekend cleaning out the exhaust crossover and EGR ports in intake (unless you are considering converting to an 4-bbl sometime down the road).
If your state/community doesn't check the EGR system for functionality, I would recommend you spend the weekend fishing (or whatever) than spend time and sweat getting greasy over something not really important.

I have worked on some intakes that it takes a punch & hammer and a drill to get those hardened carbon deposits removed (many hours later).
BudW
You must log in or register to reply here.
Share:
Reddit Pinterest Tumblr WhatsApp Email Share Link