Ahhh ..
Today was a rare day that I got to spend several hours on the 87 Fifth Avenue.

With 4 new Dorman plastic grommets, I began my quest.

Wear a long sleeve shirt to reduce the nicks and scraps you get from working blind in the cowling area.

I checked this forum and over at dippy.org and tried to follow the directions as best I could.

MISTAKE 1
I tried following the directions provided. I swear I thought I had to have 3 grommets facing the same direction and 1 grommet facing the opposite direction. Not for me.
My situation was 2 to the front and 2 towards the rear.

MISTAKE 3
When I reversed the grommets, I reversed the wrong ones. Which means I installed and removed half the grommets-- two times. Yes, it is much harder to get them out than it was to put them in considering that I didn't want to butcher them and have to drive 50 miles round trip for 2 more.

MISTAKE 4
Forgot to label the wiper arms before I removed them. That means I had to walk from one side and to the other of the car futzing with the arms getting them to be generally parallel and not waller off the right side "A" pillar nor stop to high on the glass when 'resting'. Why, oh Why, didn't i whip out my green painters tape and mark things before I took them apart?

MISTAKE 5
I did remove the plate on the backside of the wiper motor. But somehow, i don't think I got it put back on correctly. When I auditioned the wipers, they worked about 4 times, then they wouldn't move, then they moved again, then stopped and wouldn't move at all. Bleh

I'll get my pictures resized and uploaded a bit later.

The end result, I do have new grommets installed and the wiper controls have been greased with lithium. I also used lithium grease on the grommets/posts so they would rotate easily and slide on/off easily.

I do know how to properly install the linkage. Although, I did it wrong the first time and had to take it all out to do it a second time. Part of the problem is when the grommets failed, everything was just rattling around and I didn't pay particular attention when I pulled things out. 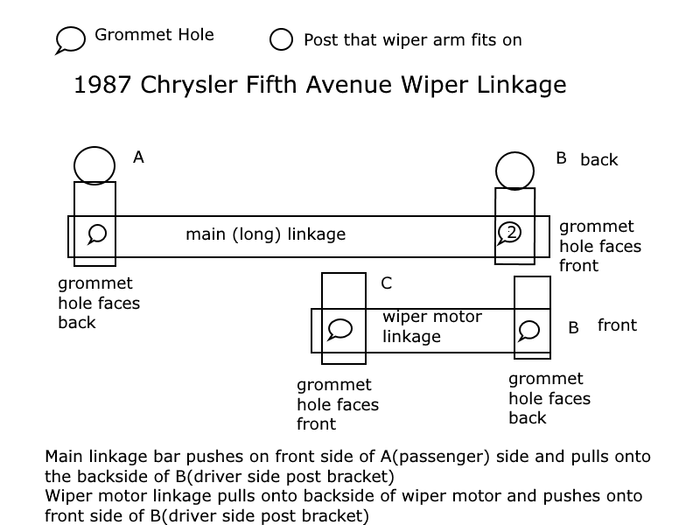 Sounds like you learned a lot on that project. Your persistence paid off, bravo. Nice diagram.

I did mine earlier this year. I could not find a kit with just the grommets I needed. The variety pack had two of them so I had to buy two variety packs. Extra grommets went to the spare parts bin.

Today was another nice warm day with sunshine.
I managed to get 2 more bolts off the truck bed ... just 2 more to go and I can take the bed off the frame.
I took the window A/C unit out of two windows and shut the windows for the winter (no drafts now). Lets just hope next year is a better year so I can actually get a replacement central a/c.

And finally,
I did try out my wipers again on the Chrysler.
I'm thinking i still need to adjust the wipers.
If I turn on the wipers, they do indeed sweep back and forth (together). Yea

But when I turn off the wipers, they stop in the vertial position straight up... not horizontal just above the bottom of the window.

I can figure that one out... my service manual is next to me and I'm thinking I have about 4 hours of me time left today. Read some in the manual, knit some on the pillow cover, crochet a little on the baby blanket, and write some xmas cards....
or
I could take a nap and be totally rested before I go to bed tonight.

Progress was made today!

You're making me look bad here. You get more done before breakfast than I do over an entire weekend. Lol

Duke5A ...
You are living up north where there are actually 4 seasons...
lol
I'm here where we have two ... hot AND not hot.

Always take advantage of the not hot days.

Question: Did you have the bell crank off the wiper motor to do the rebuild by chance? It sounds like it on 180 degrees off so the wipers park in the up position.

Hey, we get a similar set of seasons up here also. We get summer and winter with seemingly no spring or fall. Just pretty much goes from one to the other with little to no transition period, at least it has the past few years. It'll be 70's and 80's and then in a single day, POOF, 30's and 40's and then goes downhill from there.

What is a bell crank?
I did take the 'plate' off the back side of the motor (loosened the nut inside the cowling) and removed the 'plate' so I could press it on the linkage.

So you are thinking I might have the plate rotated 45 degrees?

The plate held with the nut is the bell crank. Sometimes being in the auto repair business, I forget not everyone knows the "lingo".
It does sound like it's on half a turn off. With the wiper motor in the park position, the lever should point to the drivers side. IIRC, they can only go on 2 ways. It's the only thing I can think of that would cause them to park in the up position.

Aspen500 ...
You were spot on.
I re-clocked the 'bell crank' and all is well with the wipers now!

Good deal! Feels good to be right once in a while

Want it more interesting, most newer vehicles don't have flats on the motor shaft, they have splines. Talk about a PITA to get the lever clocked right on those darn things! It's fine if the motor is in the park position but if it's broken, and stopped elsewhere, lining up the lever on the new motor can get a tad confusing, lol The service manual is usually not much help either.

First time I did that job I put the linkage in wrong too. Turned the wipers on, and clank! Broke off the grommets that I had just finished having a blast squeezing together with pliers and a large socket. Second time I was smarter, and took picture first, but the shi**y chinese grommets didn't hold worth a crap. Another time the ones from rockauto were so brittle they crumbled apart immediately. I have done this on several Mopars.

That's the reason to get genuine Mopar grommets from the dealer. I've seen them on Ebay also. Cost a little more but, as with most things, you do get what you pay for.

Aspen500 said:
That's the reason to get genuine Mopar grommets from the dealer. I've seen them on Ebay also. Cost a little more but, as with most things, you do get what you pay for.
Click to expand...

I was forced to re-do my wiper linkage bushings last winter when the rains started when the bushing on the motor arm failed. I was initially going to go with the dorman bushings.I read some not so good reviews here on them and opted to go with the OE Mopar bushings $4-$5 a pop on ebay. I took my time, took pictures and marked each arm with a sharpie. Cleaned up all the linkage, took the bushings and heated them up in a pot of boiling water for a bit. Quickly removed them from the water and they popped right onto the linkage. Year later now and no issues yet, I'm glad I went with the Mopar ones though in the end so far.

I can't say I'm a fan of greasing the bushing first. I'm not so sure that doesn't help them pop off easier.

Here's my how-to on my 79 LeBaron. I did not grease anything, got the Mopar-bushings (inside they are pre-greased enough for the linkage). The old bushings did not look too bad, but as a planned daily driver, I'd like to have the wipers working for sure.

It is definitely better to remove the whole linkage. Be careful with the 3/8 nut on the wiper motor, it can easily be broken or rounded, as it is some stamped-type nut, only. As well as with the star nuts outside, to avoid scratching the paint.

Other than that, the old bushings came out easy with a proper plier (parallel grip strongly suggested) or better even a vise, together with a nut bigger than the bushing. Remember or take pictures of how they are fit. Wrong direction -> do it again . I did not heat the new bushings (but worked inside at the kitchen table), they popped right into place with the nut and a flat handle on the other side (I used the motor connected short linkage for this).

Here's some pics of it. The bushing at the wiper motor (which is the only one turning in full cycles) had lots of stuff around. Perhaps some guest in the plenum?? 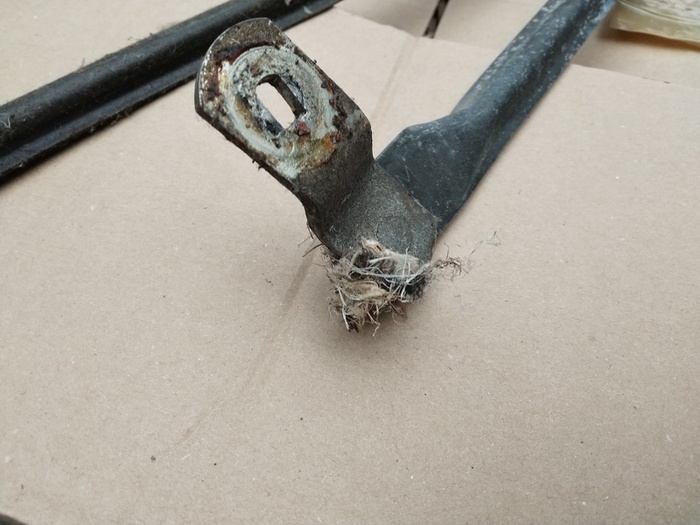 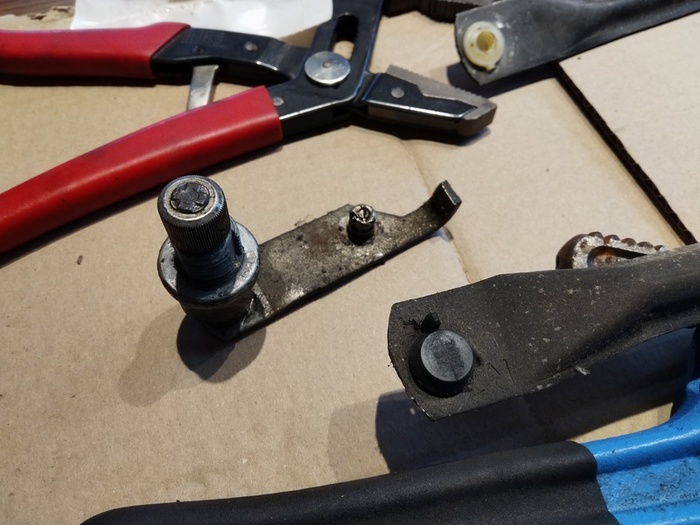 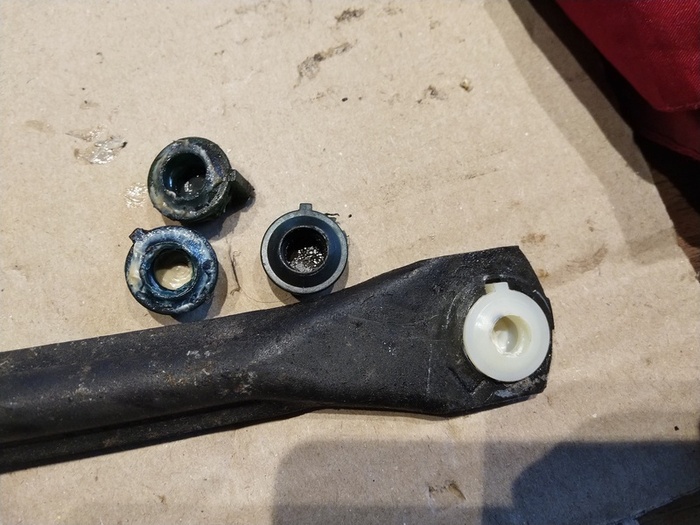 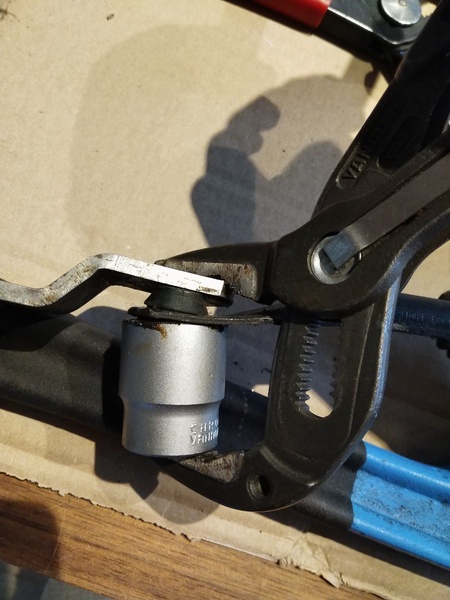 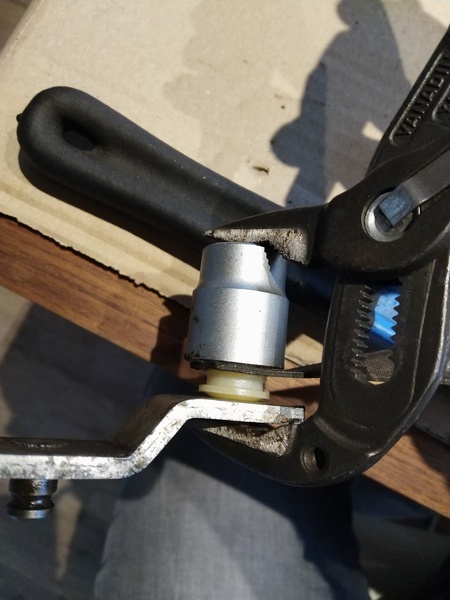 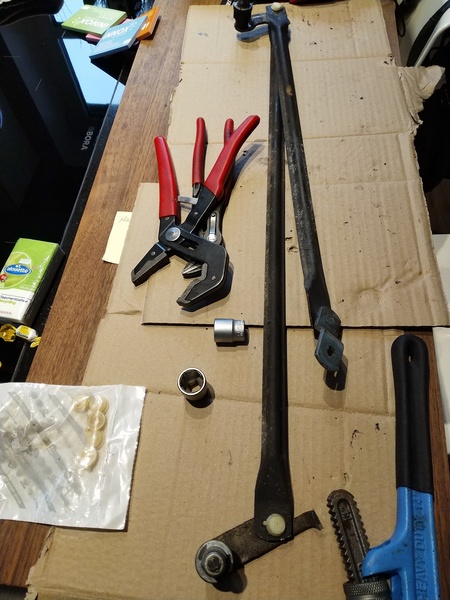 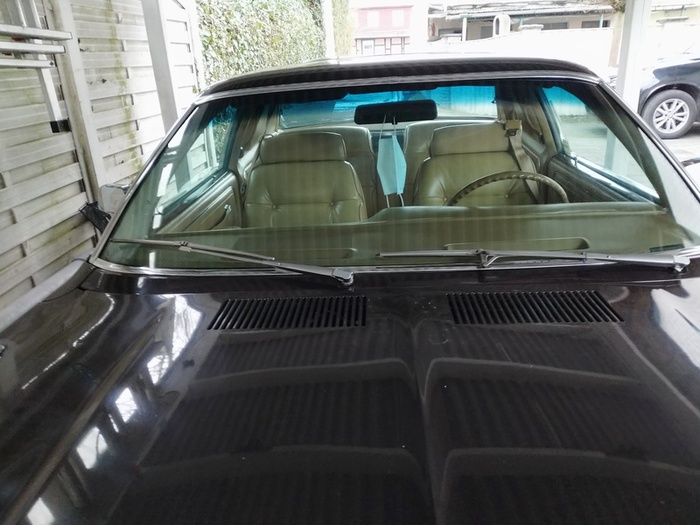 Just finished doing mine on my '89 AHB. Used the Mopar ones also, and even with good set of pliers and plenty of hand strength, I had to use a large bench vise.

had my right wiper go bad. how big of a pain in the as is the fix? do you need to go under the dash or can you fiddle around in the drain vent? i have a non AC car so i heard its easier than on an AC car. 88 Gran Fury. it recommended to remove the entire linkage or can it be fixed still attached/ it seems if fell off on the left side.

This is an under hood repair. No need to go under dash (where non AC is easier). I recommend removing, but be sure to put it back together the right way or else it will not work and could damage something. This thread has become a pretty good reference with the pics and other tips.

Hayzoos said:
This is an under hood repair. No need to go under dash (where non AC is easier). I recommend removing, but be sure to put it back together the right way or else it will not work and could damage something. This thread has become a pretty good reference with the pics and other tips.
Click to expand...

my only issue is how small the space to get to the wipers is, can any piece be removed to make them easier to get too?
You must log in or register to reply here.
Share:
Reddit Pinterest Tumblr WhatsApp Email Share Link