Hey all. I plan on replacing my head gasket on my 225 slant six sometime soon. A few people recommended me to get my cylinder head resurfaced while I have it taken apart along with maybe get a little extra taken off. Any recommendations on how much material to get shaved and what else would be needed for said amount?

Would I need any additional parts for .09 of .06 such as lifters, valves, and so on?

After you assemble the motor before the rocker assembley goes on you blue the valve stem tips. Then with the rocker and stock pushrods installed rotate the motor a few times. Then pull the rockers back off and check the sweep on the tip of the valve, there should be a shiny line across the center of the tip from the rocker. You want the sweep the be across the center of the valve stem. If the sweep is off center close to rocker side of the valve your pushrods are to long, closer to the outside of the , to short. On a stock motor its probably not critical but it will help your the gide whear.

If on an F-body – don’t worry about the pushrods – other than making sure of what hole they come out of (they need to be kept in order when removed/reinstalled).

The one thing I can think of that I would get concerned about – and would want to double check before finishing the engine install, is valve-to-piston clearance.

A stock /6 camshaft might not be worrisome, but if you were to install an aftermarket camshaft – then that could be a problem.
Also, why would you change compression ratio and not get a better grind camshaft at same time (a grind that fits the whole picture, that is)
BudW

I haven't considered a more aggressive camshaft as I know little to nothing about it. My slant is currently all stock but I don't want to go too far on the performance spectrum as I plan to keep it as a daily driver.

How many miles are on the current /6?

If engine has (or suspected to have) 177k miles on it, I would change camshaft - due to lobe wear.
If suspect to only have 77k miles – then you might be OK with current cam.
BudW

There is a lot of reasons as to why OldIron440 and I are saying – but neither was explaining why.

First of all the /6’s that FMJ’s use are Smog Engines using a Smog camshaft – neither does a thing for performance or fuel mileage.
The best thing to do is to build your /6 to pre-smog specifications and then you will get the best fuel mileage and power.

Typically, Smog-er camshafts do not have a lot of lobe to them. Also, metal hardening is better now than it was way back then. Camshaft lobes might wear faster than any other component on the engine – as the mileage goes up. I have seen some camshafts, with roughly 100k miles on the, with almost no lobes on one or more cylinders.

I’m not talking about a race camshaft – but something like an RV cam that has a bit more lobe to it.

Back in the day, the different camshaft levels were: stock, RV, a level under performance, performance, then a couple more rungs before you get to race (and so forth).

Almost all cars run better with the RV level camshaft, over a stock grind. All power accessories will work, smooth idle, and so forth, as well.

If engine appears it has 177k miles, I would change camshafts and lifters, even if going back to a stock grind, because of lobe wear. Most likely I would purchase the next higher level camshaft (a couple of rungs under performance – but above stock).

There is nothing worse than having a camshaft with its lobes worn “round” or close to it.

Going back to compression, the higher the compression ratio is, the more efficient engine will be and thereby more power it can produce. Some say for a street car 10 to 10.5 to 1 is the sweet spot. The problem is it requires 93 (or higher) octane to run – for each and every fill-up.
I suspect that is not what you are looking for?
Anything above 8.0 or 8.1 to one has got to be a good thing (note: I don’t know what it should be at) – but I wouldn’t plan on going higher than 8.7 (or so) to one ratio – which allows for machining mistakes that might push it to 9.0 to one.

I do not know what the /6 measurements are, to machine off – but I would measure and re-measure before machining – for it can’t be un-done.
BudW

I’m building a stroker big block for both of my cars and already ordered pistons for them. I had to record a lot of measurements to determine what my final compression ratio should be at. Even with parts on hand now, I still need to re-measure everything before going back together - to verify.

These are my actual measurements on one of the two engines I’m building (not applicable to your /6 – but to show what I have done).

The good news is if the actual measurements are off somewhere, there are a number of big block head gasket of different thicknesses to accommodate some change/correction in numbers.
BudW

What would be a good amount of merterial to take off of my head on my slant, I don't really want to do a cam swap as I do think it's at 77k miles and don't want to go "all in" with performance, I just want more power from it so it's not so much of a slug anymore ya know?

If you only cut the head there will be an increase in torque. Mopar advertised 8.2 cr was more like 7.5 across the board. So an increase in compression will boost drive ability and efficiency, I'd do a valve job at the same time.

Did someone say Boost?
Don't take anything apart, low CR begs for a supercharger 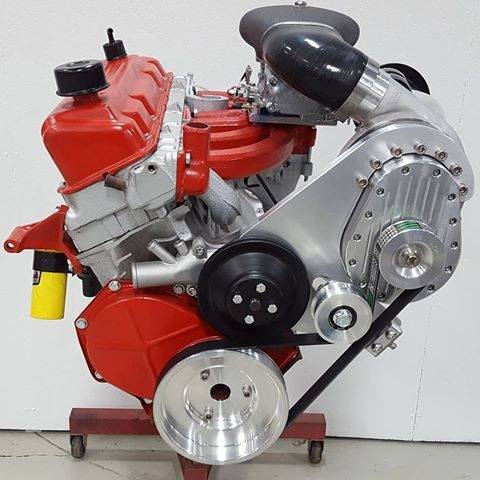