Duke5A said:
It was just the bars. I installed them in the car in July of 2013. Could still get the Moog shell/bushing assembly for the ends back then.

I see they had the Bilsteins then too?

jasperjacko said:
I see they had the Bilsteins then too?
Click to expand...

Yeah, and for a lot cheaper than what they're asking for now. I think Bilstein makes them specifically for Firm Feel. Really not that much more for a set of adjustable Vikings.

Duke5A said:
It was just the bars. I installed them in the car in July of 2013. Could still get the Moog shell/bushing assembly for the ends back then.

I keep looking at these and wondering if a 2-piece design could be made instead, so they don’t need to bend any bars.
M

The strength is in being a single piece.

You need to add shocks to this. Anything designed for the OE suspension will not keep up. Still worth it though.

Lightning II said:
I keep looking at these and wondering if a 2-piece design could be made instead, so they don’t need to bend any bars.
Click to expand...

You would need to incorporate a separate strut rod since the T bar doe this function as well. You might as well just swap in a later model OE cradle at that point.

Duke5A said:
You need to add shocks to this. Anything designed for the OE suspension will not keep up. Still worth it though.
Click to expand...

Is this your way of telling me to start that damn build thread? Lol

Duke5A said:
You would need to incorporate a separate strut rod since the T bar doe this function as well.
Click to expand...

That's what I was going to eventually lead to. If we had a strut rod then getting a straight torsion bar with a lever going to the control arm would give us more options for torsion bars.

Opticon77 said:
Is this your way of telling me to start that damn build thread? Lol
Click to expand...

M_Body_Coupe said:
My understanding is that these are just the bars themselves.

So the whole cost to "deploy" one of these setups is a few hundred dollars higher once you account for the other parts.

@Duke5A,
You got these before they "dried-up", what was part of that whole package?
Click to expand...

He is actively calling people again, this time it's all about dropping some coin on these as he's taking actual pre-orders. The whole "order to ship" process will take about 10-12 weeks, so the bars should be going out by end of March, or thereabouts.

Anyways...$1200/kit is his price which is about $75 cheaper than if you were to purchase each component separately. That includes the bars, the mid section (pivot) and LCA end-point bushings along with the mounting plates. The poly bushings require your original metal shells to be taken apart and re-used.

Since I have a set of NOS end-point bushings I was just going to toss them on and install, but pricing it alone only resulted in $5 savings...which, well, as you can imagine is a no-brainer: yup, order the FULL kit instead and get new POLY bushings for $5 "extra".

Sooo...if you were previously talking to FirmFeel about this expect to be getting a follow-up call (if you haven't already).
C

To be clear: are they remanufacturing the bar end assembly that the rubber bushing is attached to, shells, shaft and all? If not, you’d still need to reuse your old metal shells and deal with that bear regardless of using poly bushings or not… real curious if they went as far to redesign the entire torsion bar and end assembly to make it all one piece or if they’re selling 90% of everything you need as a full kit.
Last edited: Dec 27, 2022

Camtron said:
To be clear: are they remanufacturing the bar end assembly that the rubber bushing is attached to, shells, shaft and all? ...
Click to expand...

Their product page is here => Firmfeel Mopar Suspension and Steering

My understanding (until I see the invoice where I expect to see all this spelled out) is that you should basically plan on re-using the metal shell for the bushing assemblies.

Their page isn't very clear about the mid-section (pivot) bushing assembly as it states the following:

So does that mean the metal shell is part of that??? I do not know, but it sounds unlikely and I think the reference to 'base plate' simply means that you need to re-use the C-shell.

Now, something to consider is the following => polyurethane torsion bar MoPar

FF does a nice job of nearlying matching on the end-point parts, but is 2x as expensive on the mid-point, which I suspect is due to the "...wide base plates" noted on their product page.
C

Far as I can tell, FF have a wider pivot base plate, which I marked with the red arrow.
The parts I’m curious about are the end shells and end shaft assembly (marked with Xs) that attaches to the Torsion bar end and mounts to the lower control arm…if they’re not offering the end shaft assembly and they have not integrated it into their bar design, guys will still have a bear of a job to separate those end shafts from their old torsion bars and separating the shells, ect… 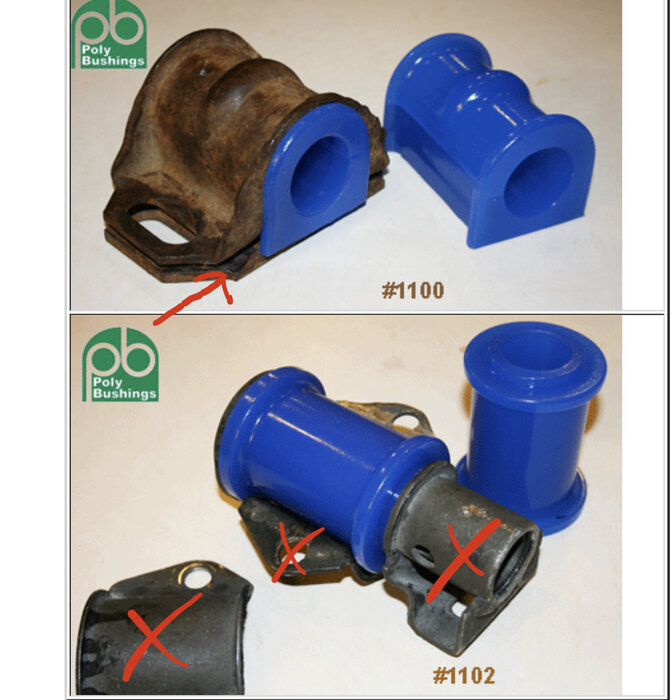 I pre-ordered the entire torsion bar package from them today. Shipping probably late March. If you want one, I'd call them now and get in line.

Yeah, I got called yesterday. I’m really on the fence if I can get it now or even later on. Gotta love how pricey things have gotten lately.

So here is some additional info that Frank shared when we spoke again yesterday (I told him we had an on-going discussion about this on our forum here and that I would be sharing):

- I explained to him that my coupe was not a auto-cross type of a ride, he was not worried that the current 1-1/4" bar would be too stiff

2) they intend on bringing back this product, meaning they will stock it and will continue to make new runs, as to the sizing and frequency, that all depends on the demand

3) he acknowledged that the prices are higher, his costs have gone up

- I did not get a feel like they are trying to make this into a "gold-mine" lol, the matter was presented fairly, the costs of getting this stuff up and running again are high, more than what he originally thought they would be (per the initial discussions with Matt who has since left FF)

I was initially thinking of ordering two sets, but yikes...that ends up being expensive!!! Given that he intends to bring these back in the future, and the fact that I have no idea how the bigger (1-1/8) bar will handle on the street, I am a little hesitant to do so...haven't made up my mind yet, but I'd hate to plunk down that sort of a cash only to find out it is NOT the configuration I need for my coupe!
C

…but still no word if it comes with the two end shafts, the 4 shell pieces and the two collars/sway bar link mount? I’d want to know what all it came with and what I needed to install it before I handed them any cash for it.

Camtron said:
…but still no word if it comes with the two end shafts, the 4 shell pieces and the two collars/sway bar link mount? I’d want to know what all it came with and what I needed to install it before I handed them any cash for it.
Click to expand...

Alright...this was probably the last time that I spoke with Frank until the bars ship later on in March, however we did talk this evening about this very thing.

Short answer: ONLY the bars, the urethane bushings and the wide plate for the pivot bushing is what is included in the kit. Current price is $1,200 for the 1-1/4" bar. You need to re-use the shells from the OEM install.

I asked whether he's considered doing up the required tooling work to be able to stamp out NEW shells...he said: yup, but for the volume of parts they've been historically selling for our rides (F/M/J-bodies) the up-front cost to develop the product is simply far too large and not something they'd ever see a return on. He did say they had steady sales of suspension stuff, primarily the rear-end, but some good amount of front-end as well, overall though this just wasn't in the cards.

Further on, one clarification: he is NOT intending on stocking the bars in the future. They will remain a "special order" product, which means that he will have the ability to run a batch as the demand materializes with a much shorter leadtime, but there will be some waiting time to get enough orders in the queue.

For my part, I "throttled back" a tad on my desire to source these: I booked my order for 1 kit. Once I have these installed on the coupe and manage to get some reasonable street miles, I will make a call on whether the '81 coupe gets the big or the small bar. For now, Frank put me in the queue for the 1-1/8" order.

All in all, yeah, these are pricey, but there just isn't another cheaper way to deal with the linguine T-bars we have on our rides, especially if you intend on pushing the chassis further. My coupe has 7 summers of cruising on it from a full-time rebuild (all new soft parts, and majority of hard stuff replaced at that time). I am actually running a set of adjustable KONI shocks, which do an awesome job of providing some tunability, but even with those in place, the steering gear having no slop and the pressure tuned down to take away some of that over-assist, things are still a little too squirly.

I look forward to installing these and will start the prep work on the pivot bushing shell setups in the meantime.
C

Good luck separating the end shafts from your old torsion bars. Might want to start soaking them in penetrating oil now or get ready to carefully cut the end shafts out of your torsion bars.
If your car doesn’t have a big block and your not hitting the auto cross tracks, I can’t imagine most guys wanting the larger bars on their car unless their looking for a real stiff ride.
Tubular control arms, and new torsion bar bushing made my steering and handling rock solid (steering box slop aside) coupled with cop front and rear sway bars. I only want the larger bars because I have a big block swap planned for my car and need to be able to handle the extra weight up front.
You must log in or register to reply here.
Share:
Reddit Pinterest Tumblr WhatsApp Email Share Link